The Minority in Parliament led by the Minority Leader and Member of Parliament for Tamale South Constituency, Hon Haruna Iddrisu is calling for a probe into the degazette and alleged sale of portions of the Achimota Reserve.

According to him the inquiry will establish persons who acquired the lands under the guise of declassifying the Forest.

Some portions of the Achimota Forest in Accra,in the southern periphery close to the N1 highway,handed over to the Owoo Family in 2013,is no longer a forest reserve.

This follows the coming into force of the Executive Instrument (E.I.) 144 gazetted on behalf of President Nana Addo Dankwa Akufo-Addo on April 19, 2022 by the Minister of Lands and Natural Resources, Samuel Abu Jinapor.

The Minority is calling on the President Akufo-Addo to do the needful by respecting the provisions in the Land Use and Spatial Planning Act,2016(Act 925) and the letter and spirit of the 1992 Constitution of actually holding public lands on behalf of and in trust for the people of Ghana.

“We call on the president H.E Nana Akufo-Addo to in accordance with Article 278 of the 1992 Constitution, appoint an independent Commission of inquiry into all the matters relating to the Achimota Forest land saga” he stated. 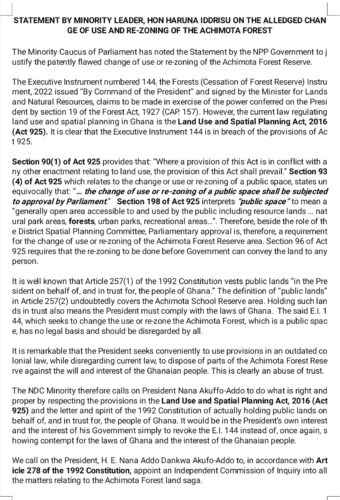 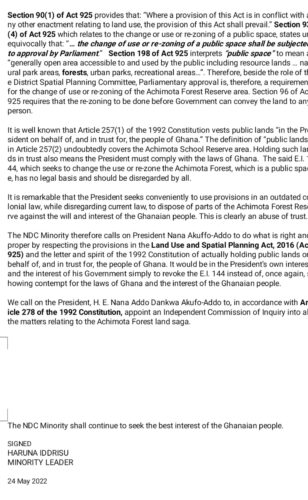