The United Kingdom’s Queen Elizabeth II has a book of condolences that is signed by President Nana Addo Dankwa Akufo-Addo.

The book of condolences was opened on Monday, September 12, 2022, at the British High Commission in Accra, with President Akufo-Addo being the first to sign it.

“I remember her presence and her friendliness. It is sad, we all have to go. It is sad that she is gone” he remarked. 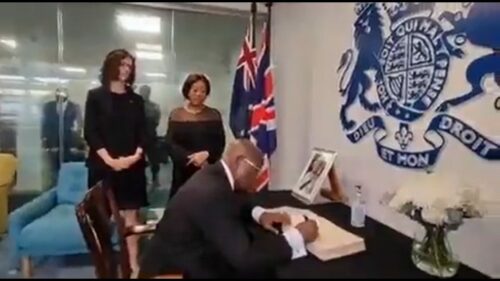 The book of condolences will be opened on Monday at 11 a.m., according to an announcement made by Harriet Thompson, the British High Commissioner to Ghana.

At her castle in the Scottish Highlands, Balmoral Castle, the Queen passed away on Thursday, September 8, 2022.

She held power for 70 years, making her the longest-reigning British monarch.

King Charles III and his wife Camilla have made their official entrance into Buckingham Palace.

Cheers erupted as he approached the cheering onlookers outside the palace, and he shook their hands.

At Buckingham Palace, the crowd anxiously awaited the entrance of the new King.

As the King’s footguards formed up in the Palace Plaza, a hush descended among the spectators.

The Victoria Memorial was filled with the echo of instructions yelled.

The main gates were lit up when the clouds parted to let in some sunshine.

Then, out of nowhere, cheers started to reverberate down the Mall and toward the Palace.

Some onlookers eventually noticed the royal automobile just behind the Palace gates after a brief period of wondering whether they could see him or exactly where he was.

The King suddenly materialized in front of the gates, by the flowers, where he engaged in conversation and handshakes with bystanders.

Before finally making his official entrance inside Buckingham Palace as King Charles III, he repeated this action a few times.

The park was filled with shouts of “Long live the King,” and there was applause from large crowds.