Almost 80,000 girls in Ghana aged 12 to 17 years already married or living with a man – Statistical Service

According to the 2021 Population and Housing Census, 79,733 Ghanaian females between the ages of 12 and 17 who were married or cohabitating with a guy.

With rates more than double the national average of 4 percent, the regions with the greatest percentage of females in union are the North East with 13 percent, Savannah with 10.9 percent, and Northern with 10.6 percent.

The organization also reported that despite universal basic education being free and required, nearly a quarter of a million females between the ages of 6 and 14 have never gone to school at all. 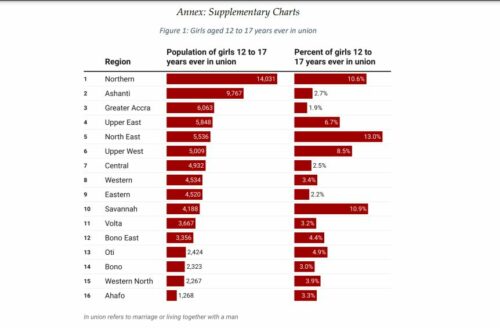 The Northern Region, which has the most girls who have never attended school (73,516), is followed by the Savannah (27,930) and North East (22,857) regions in terms of the percentage of these girls.

The percentage of girls who are not currently enrolled in school (or who have never attended) is similarly highest in these three regions, with Savannah leading all others with 40.2%, followed by the North East Region (29.3%), and the Northern Region (28.5%).

Girls between the ages of 6 and 14 who are not in school, on average, live in rural areas.

In addition, 99,150 girls under the age of 15 are working, with half of them not attending school.

The regions with the highest percentage of girls participating in economic activity are the Northern (22,647), Oti (17,694), and North East (9,153), according to the service.

To commemorate the International Day of the Girl, this data was made public.

The purpose of IDG is to draw attention to issues including early marriage, a lack of educational opportunities, and other issues that impede young girls from realizing their full potential.