After Charles Adu Boahen was mentioned in the most recent exposé by investigative journalist Anas Aremeyaw Anas, titled “Galamsey Economy,” which will have its world premiere tonight at the Accra International Conference Centre, President Nana Addo Dankwa Akufo-Addo referred him to the Special Prosecutor for investigation.

The referral of Mr. Adu Boahen to the Office of the Special Prosecutor comes after the President terminated his appointment after learning of the accusations made against him. 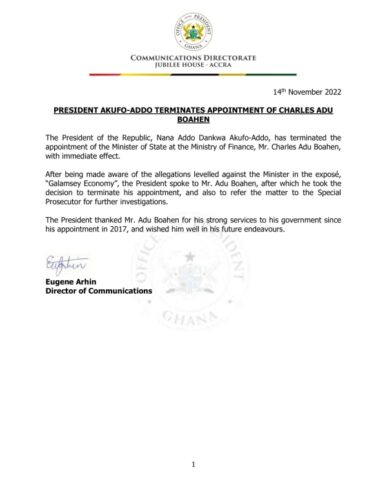 The vice president, Dr. Mahamudu Bawumia, is accused of using Mr. Adu Boahen’s name, among other things, to sell influence and extort money from investors.

According to Anas, Mr Adu Boahen told undercover journalists who pretended to be businessmen in a Dubai hotel that to get to the attention of the Vice President, they will “need just USD200,000 token as an appearance fee and some positions for the Vice President’s siblings to get his backing and influence in establishing a business in Ghana.”

According to the leader of Tiger P.I., the inquiry was meant to look into high-level corruption that threatens investor trust in Ghana.

Dr. Bawumia said shortly before Mr. Adu Boahen was sacked that he need to be fired and looked into if the accusation is genuine.

According to Dr. Bawumia, his integrity is his most prized possession in life, and he would not permit anyone to exploit his name to carry out unethical acts.

Previous Finance Minister censure hearing: Give evidence to back up your claims – Gabby to Minority
Next President Akufo-Addo should be fired rather than Finance Minister – Dr Richard Amoako Baah