The New Patriotic Party (NPP) leadership says it wants and expects all NPP MPs to adhere by the agreement struck and be present in the house tomorrow when the budget is presented.

This comes after the NPP National Executive intervened to stop 98 members of the Majority in Parliament from potentially boycotting the budget presentation.

Until the president heeds their request to remove the Finance Minister from his post, the MPs have warned not to participate in any matter brought before the house by the minister.

The NPP national executives met with the MPs to discuss this in order to make sure they did not follow through on their threat.

As a way to break the deadlock, a statement co-signed by the NPP’s general secretary and the majority chief whip, Frank Annoh-Dompreh, pleaded with the majority members to hold off on their demands until the International Monetary Fund (IMF) bailout discussions are over.

The NPP lawmakers had threatened to skip all of the Finance Minister’s business that was brought before the parliament, including the budget presentation scheduled for November 24, 2022, on that day.

In order to prevent them from following through on their threat, the NPP national executives met with the members of Parliament. 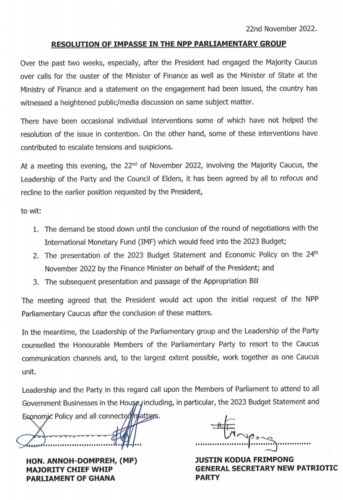