The Shell fuel station at Adomi Bridge, Atimpoku, in the Eastern Region has had its activities suspended by the National Petroleum Authority (NPA) because it allegedly sold water-laced petroleum products to unwary customers.

This comes after a video that went viral on social media and a complaint regarding a possible tainted fuel purchase from the station that was submitted to the Authority on August 29.

According to the NPA, after conducting a water content presence test, a dip into the outlet well revealed the presence of water.

The management of Vivo Energy suggested in a letter to the Authority, according to the NPA, that water entered the underground Super tank after a particularly severe downpour.

The NPA said that this idea was supported by its investigative team.

The Ghana Standards Authority’s gasoline is currently the subject of a forensic audit by the authority.

The statement said, “The station will only be permitted to resume operations if all corrective actions have been implemented and approved by the NPA.”

While investigations are still ongoing, the NPA assured all impacted consumers that its remedial action would be for the station to fix the affected vehicles and refund the customers.

In a statement, Shell Ghana added that internal inquiries into the event were still ongoing.

Assistance is also being given to the consumers whose cars were impacted by the tainted fuel, Shell noted in the statement. 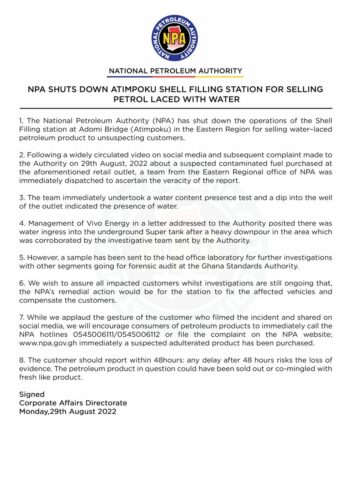