The Minority in Parliament has claimed that the Bank of Ghana (BoG) has printed GH22.04 billion in additional money to pay the 2022 budget without consulting Parliament the BoG has refuted these claims.

The amount mentioned in a news release dated July 26, 2022, signed by Ms. Sandra Thompson, Secretary to the Central Bank, stated that it reflected claims against the government, not newly printed money to support the budget.

“The amount of GH22.04 billion represents net claims against the Government and does not represent fresh money printed to finance the Government’s budget.”

The Bank added that the GH22.04 billion in net claims included the sale of stocks and bonds by banks, the country’s receipt of SDRs from the International Monetary Fund (IMF), the drawdown of government balances at the central bank, and a negative balance on the government’s account as a result of failed auctions. 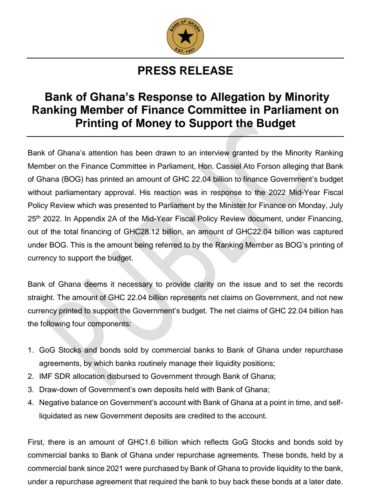 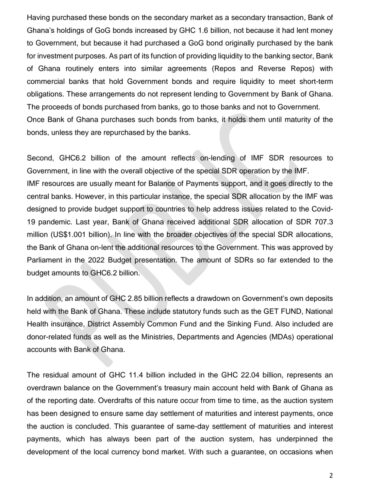 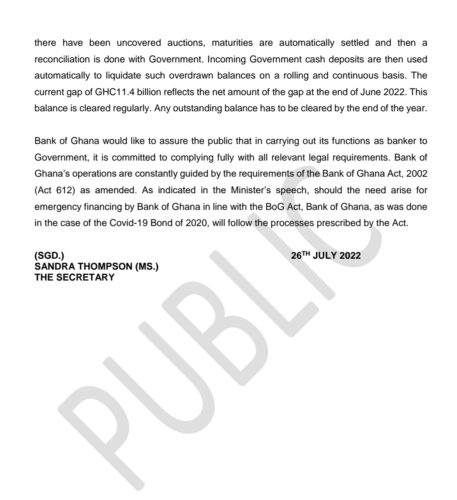 A deputy minister of finance named Dr. John Kumah has refuted claims made by the minority in parliament that the Bank of Ghana produced GH22 billion in notes without getting consent from the legislature.

According to him, there is nothing illegal about the indicated sum, which is an overdraft that the Bank has provided to the government.The Governor of the Bank of Ghana (BoG) was charged on Monday by Dr. Cassiel Ato Forson, the Minority spokesperson on Finance, with producing additional currency for the nation without getting permission from Parliament.

The BoG and the government, according to the former deputy finance minister, had sustained illegality, which needed to be addressed.

The Finance Minister and the government went to the Central Bank and urged the BoG to print money of GH22 billion between January and June 2022, he claimed.

Without alerting the Parliament or any of us, they minted GH22 billion in new currency, he claimed.

Previous Regarding corruption at the NDA, Special Prosecutor invites the Coordinator for Special Initiatives at Jubilee House
Next We are committed to turn economy around with God on our side-Finance Minister