Bawumia has been accepted by Gonjaland as a son, not a stranger – Jinapor declares

Vice President Dr. Mahamudu Bawumia has amassed a solid and enviable rapport with the Chiefs of the Gonja area, according to Minister for Lands and Natural Resources Samuel Abu Jinapor.

The Vice President, who has consistently served the numerous paramouncies and the Yagbon people, is well known to all chiefdoms and palaces in the Savannah Region, according to the Damongo Member of Parliament.

At the Kpansheigu Palace in Salaga, in the Savannah Region, where Dr. Bawumia is touring as part of his working visits, Samuel Abu Jinapor was giving a speech. 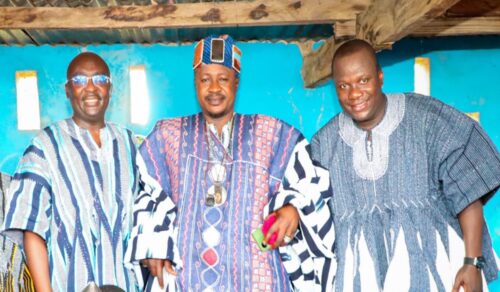 He added that “I can say without a shred of doubt that nobody has visited Jakpa palace more than the Vice President. He literally lives there, he literally sleeps there because he sees himself as a ‘Gonjalander’ and sees himself as a son and grandson of Jakpa and all of Gonja has also accepted him as our brother, our junior father and as our family member”.

Dr. Bawumia is expected to be the flagbearer for the ruling New Patriotic Party in the 2024 elections. This prediction has garnered strong support from the party’s grassroots, noteworthy, and top members.

Election watchers claim that some congratulations given to him on his 59th birthday included declarations and support for the yet-to-be-announced aspiration, putting the Vice President in the lead in the party’s upcoming presidential primary.