Following a brawl earlier on Tuesday, the Bolgatanga Technical Institute (BOTECH) has been shut down by the Upper East Regional Security Council(REGSEC).

A few hours were provided to the students to leave the school grounds.

Stephen Yakubu, the Upper East Regional Minister and Chairman of the REGSEC, declared that the shutdown was everyone’s best option.

The final-year students will only be permitted to enter the building when they have a paper to write, he said. 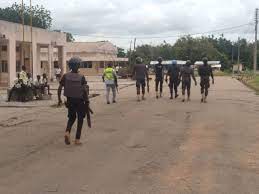 “You have brought this upon yourself,” he informed the pupils.

The minister added that if the kids did not leave on time, security forces would deal with them.

Following the arrest of two of their classmates and a teacher for allegedly cheating on an exam, the students rioted.

Seven teacher-owned vehicles and other property have been vandalized.

After a number of staff members and students were taken into custody, chaos broke out at the Bolgatanga Technical Institute in the Upper East Region.

The cars of certain school administrators were among the items damaged by the pupils.To keep the pupils under control, police were called to the school.

According to reports, they used tear gas and warning bullets.

The National Investigations Bureau personnel were in the school on Monday to monitor continuing tests, and Yorose Zackary, the school’s principal, recalled that two kids were detained for having phones on them.

According to Mr. Zackary, “as they searched through the phones, they saw some questions that they considered to be the exam paper they were composing.”

During questioning, it was claimed that the head of the electricals department had set up a WhatsApp group to which leaked test questions were delivered.

The students were given bail on Monday night by the school administration.

Tuesday morning, after being transported to the NIB office along with some accused personnel, pupils from the school became agitated and asked to see their peers.

Police responded to the situation in the school.

“Thankfully, the peace has been preserved.There are police here,” Mr. Zackary declared.