Manufacturers have raised the cost of a 50-kilogram bag of cement as of August 30.

According to investigations conducted by Ghanatodayonline.com, all the main manufacturers have raised their pricing.

A 50-kilogram bag of Super Rapid cement was priced at 64.59 in GHACEM’s updated price list for its distributors.

While the GHACEM Extra costs Ghc72.91 per bag, its Super Strong brand only costs Ghc 68.

Some manufacturers claim that the hike is a result of an abrupt spike in operating expenses starting in July 2022 as a result of the fast depreciation of the cedi in recent months.

Under the condition of anonymity, a representative from one of the manufacturing companies explained to the media that “the factory pricing (wholesale price) of a 50 kilogramme was based on an exchange rate of around 7.60 in June 2022.

Customers could anticipate an 8 to 15 cent hike per bag, according to several manufacturers.

However, the location will matter because Accra can cost more than the other regional capitals because of transportation.

According to a company, “Someone has to pay for this abrupt spike in cost because most factories have to import some raw materials at a dollar rate of more than 9,”

Some of the manufacturers also informed the media that it has been very challenging to absorb all the increased operating costs, and as a result, some of the burdens must be shared with the customers.

The product’s price may have increased for the second time in less than three months as a result of what the producers referred to as the rising cost of production.

The development may have an immediate impact on housing costs as well as the personal finances of many people who are now building homes around the nation.

It might also have an impact on how much ongoing construction projects cost.

The government has recently come under pressure from manufacturers to review the taxes on inputs and fees at Ghana’s ports.

They had thought the government would do something to help bring down the cost of cement.

It is hoped that by reviewing the taxes and levies at the ports, these producers will be able to halt the recent increases in cement prices. 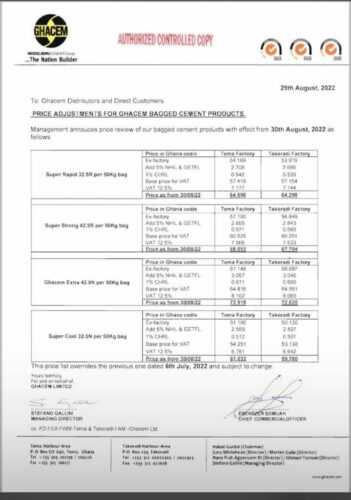