Samuel Okudzeto Ablakwa, the Member of Parliament (MP) for North Togue, has claimed that President Nana Addo Dankwa Akufo-Addo has refused to accept the resignation of Charles Adu-Boahen, the Minister of State (in charge of Finance).

The MP questioned why the president is stopping Adu-Boahen from resigning in a tweet posted on Thursday, October 27.

He implied that the president doesn’t take the current economic situation seriously because he won’t accept the resignation.

“Parliament may have to turn the heat on President Akufo-Addo. Why is he refusing to accept the resignation of Minister of State at the Ministry of Finance, Charles Adu Boahen? The President continues to downplay the profound economic crisis created by his abysmal leadership,” the MP’s posted it on his social media pages. 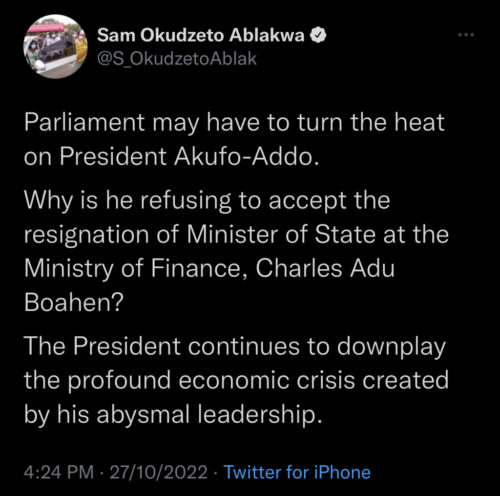 The resolution to dismiss Ken Ofori-Atta and Charles Adu-Boahen, the Minister of State in charge of Finance, was submitted by the minority caucus of Parliament.

The MPs clarified that their attitude came as a result of several worries about the economy’s bad mismanagement, which compelled the administration to apply for IMF help.

“As representatives of the people and as duty bearers, we must move a motion to call for the end of the finance minister,” said Ibrahim Ahmed, the deputy minority chief whip.

The majority of our brethren concur with this.

They ought to endorse the Minority Leader’s request for the Finance Minister to be fired as well as his motion to that effect.

The proposal has been accepted by the Speaker of the House, Alban Bagbin, who has scheduled a secret vote for November 10, 2022.

Previous If Mahama wins 2024 election, he will be the worst president ever, according to Hassan Ayariga
Next Stop funding National Cathedral at this crucial time – Mahama advises Nana Addo