The staff and students of the Ellen White SDA Basic School in Koforidua, in the Eastern region, have received a six-unit classroom building and an office complex from the New Juaben South Municipal Assembly.

The classroom building at Ellen White SDA Basic School can boast of contemporary and standard fixtures, including storerooms and a common area for the instructors’ staff, among others. 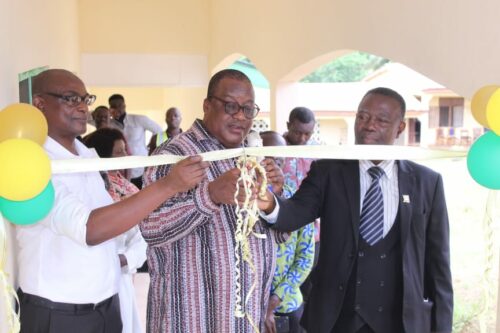 Mr. Edward Abazing stated to journalist Kaakyire Kwasi Afari of Afeema FM that as education is essential to all development, the MCE has chosen to prioritize it for the benefit of all local children.

He expressed confidence that the recently completed building will significantly improve teaching and learning, noting that the school block will increase the student to teacher ratio.

The children were urged by Mr. Abazing to take their education seriously, especially as they were ready to face the Basic Education Certificate Exam this year.

Regarding the maintenance culture, the MCE tasked the educators with making sure the building was being used properly.

The Municipal Education Director for New Juaben South also showed his appreciation to the Assembly, the MCE and the government as a whole for their dedication and contribution to the education sector most especially Koforidua.

He then again said the education directorate is determined to providing quality education to all school going age therefore, he encourages parents and guardians to enroll their children in schools in the municipality.

On his part, the headteacher of Ellen White SDA Basic School, Boakye Acheampong acknowledged the MCE and the Assembly’s effort to bring development to the doorsteps of the school.

To him, giving pupils the most comfortable environment for quality teaching and learning were one of the topmost priorities since becoming the headmaster in 2017.

However,  he requested for additional amenities such as upgrading the road leading to the school, toilet facility, playing grounds and adequate security for the pupils.

According to Mr. Acheampong, marijuana smokers have taken over the Ellen White SDA Basic School and are now using it as their center of operations.

The school’s headteacher bemoaned the fact that marijuana users frequently enter the campus after hours and use it as a base for smoking. They occasionally break into the offices to vandalize and steal property, which has become a serious issue for the school.

Students thanked the MCE for building the magnificent structure.

According to them, the new classroom building will motivate parents to enroll their children in the school, which will significantly boost enrolment and academic performance.

Previous 21% increment in cocoa price per bag disrespectful to farmers – PNC
Next In 2021, VRA reported a profit of GHC112 million