The head of the EC, Jean Mensa, engaged in some odd activities during a meeting with several political parties, including spiritual prayers to subdue alleged demons, according to Johnson Asiedu Nketiah, the general secretary of the National Democratic Congress (NDC).

The Electoral Commission declared the accusations to be untrue in a statement.

“The attention of the Electoral Commission has been drawn to a statement made by Mr. Asiedu Nketiah, General Secretary of the NDC, to the effect that the Chairperson of the Commission, Mrs. Jean Mensa, brought spiritualists to an IPAC meeting to cast out demons.”

“For the information of the General Public, this is untrue. It never occurred. IPAC meetings are meant to discuss issues relating to Ghana’s Electoral System. This is exactly what occurs there. IPAC meetings are attended by Political Parties, Civil Society and Development Partners.”

The Electoral Commission pressed Mr. Nketiah for evidence in support of his claims.

The whole statement is provided below: 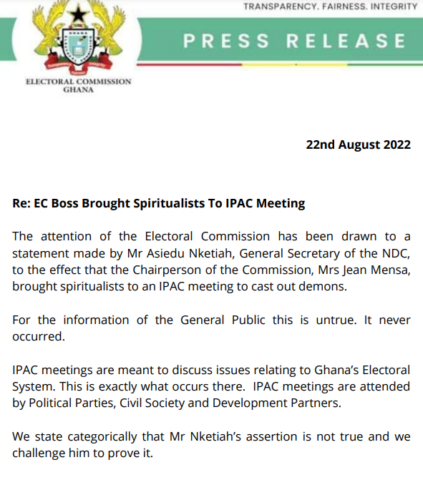 Previous Akufo-Addo: I have no preference for any NPP flagbearer candidate
Next Despite the fear of terrorism, Nana Addo warns security organizations not to get complacent