Osei Kyei-Mensah-Bonsu, the majority leader, and Gabby Asare Otchere-Darko, a member of the New Patriotic Party (NPP), have reconciled after the latter accused the former of plotting against him.

A day after the majority leader attacked Gabby Otchere-Darko harshly, the two were seen together in a widely circulated photo with wide smiles on their cheeks.

On November 16, 2022, O.B. Amoah, the deputy minister for local government, and Gabby Otchere-Darko paid the majority leader a visit at his office in Parliament, according to Asaase.com.

The majority leader vented his ire over several accusations made against him by Gabby Asare Otchere-Darko in a recent interview with Kumasi-based Sompa FM. 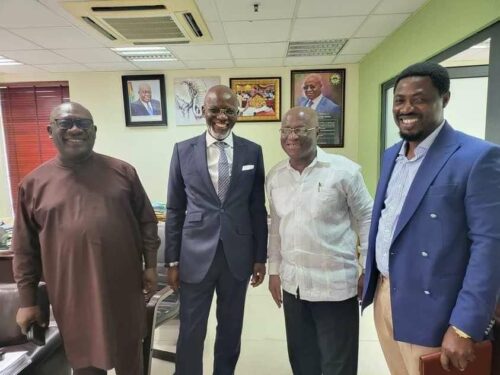 The representative for Suame claims that Mr. Otchere-Darko has falsely accused him of being the brains behind several NPP MPs who have demanded the dismissal of Finance Minister Ken Ofori-Atta.

“From nowhere, we hear Gabby Otchere-Darko on his Asaase Radio station accusing me of instigating what was happening, [but] for what? What do I stand to gain from that?” he retorted.

The majority leader questioned the authority of the cousin of the finance minister for levelling such allegations against him.

“There are people who would rather want to cause disintegration while you are committed to integrating. But now this has brought about another sense of anger. That Gabby Otchere-Darko—who does he think he is? I serve Akufo-Addo, and I serve the party as well as the government… when we talk about the government itself, what is your locus to be accusing me of being an instigator?” the majority leader questioned.

The majority leader said that when a number of NPP MPs publicly demanded the expulsion of the finance minister, it really needed his involvement to restore calm.

Additionally accusing Gabby of supporting a rival in the 2016 NPP primaries, Osei Kyei-Mensah-Bonsu—who also serves as the minister for parliamentary business—noted that he failed in his mission.

“You (Gabby) are the same person who wrote something for someone to publish on his radio station that I will lose if I contest for re-election, hence my saying that I will not contest again. Gabby Otchere-Darko, have you contested an election before? They are the same people who sponsored people to contest against me in 2016, it didn’t work for them.”

According to the majority leader, Gabby Otchere-Darko accused him of instigating calls for the finance minister’s sack just so the leader of government business in parliament can be considered as a replacement for the underfire Ken Ofori-Atta.

But according to Gabby, he has never made any such allegations against the majority leader.

“I have listened to excerpts of the interview of Majority Leader, Osei Kyei Mensah-Bonsu, on Sompa “I had gone on Asaase Radio to accuse him of being the mastermind behind the NPP MPs seeking for the resignation of the Finance Minister,” the radio host said.

“I have since given him a message on this, denying same, but I feel it is also vital to openly state my position.

“I have never directly or indirectly mentioned anything like that on Asaase Radio or any other radio station or media outlet, whether it was on the air, online, or in print.

In fact, I have purposefully avoided making public comments on this matter in the Majority Caucus of Parliament up to this point, according to Gabby Otchere-Darko’s  unequivocal declaration on November 15.

Previous Beginning 2023, all used cars must be accompanied by a Certificate of Conformance – GSA
Next ‘Missionary sex style’ during pregnancy is not advisable – Midwife