Investigations against alleged corruption and crimes related to corruption have been launched by Special Prosecutor Kissi Agyebeng in relation to unlawful small-scale mining, sometimes known as “galamsey.”

In a statement released on Monday, Agyebeng said that the investigation “includes the active and ongoing enquiry into allegations of use of public office for profit against Charles Bissue, during his tenure as secretary to the Inter-Ministerial Committee on Illegal Mining, arising from an investigative documentary titled Galamsey Fraud Part I, published by Tiger Eye P.I.” (10 October 2022).

The investigations also focus on the operations of Akonta Mining Limited, a company owned by Bernard Antwi Boasiako, better known as Chairman Wontumi, the NPP’s Ashanti regional chairman, as well as other businesses, alleged foreign nationals engaged in illegal mining, and political party officials accused of corruption and related offenses.

The probe “targets some Ministry of Lands and Natural Resources and Forestry Commission personnel,” the statement continued.

The Inter-Ministerial Committee on Illegal Mining (IMCIM), which has since been disbanded, will also be the focus of this investigation, particularly with regard to the management and confiscation of excavators, machinery, road vehicles, and gold nuggets. 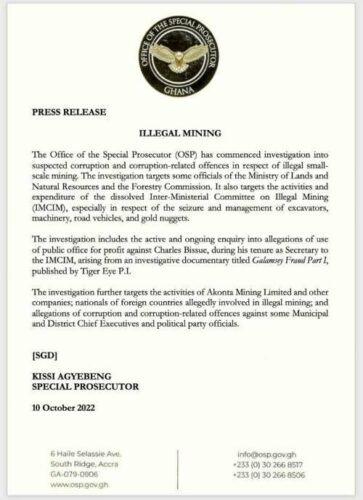