The Foreign Ministers’ meeting is an annual event that serves as an opportunity for an open and informal dialogue between African and Nordic countries on a variety of foreign policy and global issues related to peace and security, investment and trade and avenues for realising the potential of the youth.

The 2022 NAFM was held under three thematic areas namely peace and security, sustainable societies and co-operation in multilateral fora.During the Forum, Ghana made several interventions on peace and security in the West African sub-region, maritime security and Ghana’s role as a non-permanent member of the UN Security Council.

To address this challenge and to prevent situations of conflict, he suggested the need to strengthen Early Warning Systems (EWS) by creating a system that constantly collects, monitors and analyses data that alerts decision makers of the potential outbreak, escalation and resurgence of violent conflicts.

He further added that identifying Early Warning Systems alone are not enough to stop conflicts. He indicated that it could only be useful if it is strongly linked to Early Response Mechanisms including preventive diplomacy, mediation, peace-making dialogues among others and also noted that the gap between Early Warning and Early Response is what has often escalated crises situations into violent conflicts.

On the margins of the Meeting, Ghana held three (3) bilateral meetings with Finland, Norway and Sweden. Discussions centered on further deepening the cordial relations that exist between Ghana and the three (3) respective countries.

During the meeting with Finland, both countries discussed the need to collaborate on a wide range of areas including circular economy, sustainable development, peace and security issues, climate issues, education (particularly TVET) and health.

The highlight of the bilateral meeting between Ghana and Finland was the signing of an MoU to establish political consultations in the areas of circular economy, clean technology, agriculture, ICT, manufacturing, energy, digitization, education, health, among others. The Deputy Minister noted that the signing of the MoU which comes on the heels of the passage of Finland’s National Africa Strategy was timely as it provided the framework for the two countries to engage in transparent dialogue and interaction and move relations between both countries forward in the spirit of friendship and cooperation.

The Minister for Foreign Affairs of Finland, H.E. Mr. Pekka Haavisto signed the MoU on behalf of Finland while Hon. Kwaku Ampratwum-Sarpong (MP) signed on behalf of Ghana. 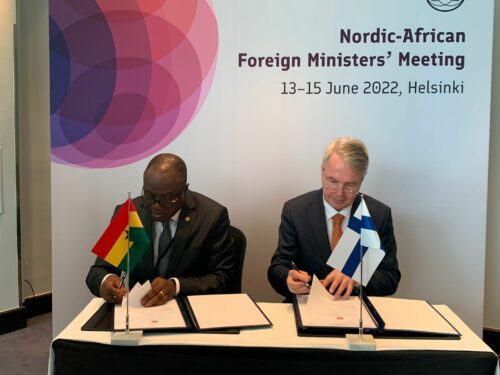 Previous If we do not rise above partisanship, Parliament will be paralyzed” Speaker Bagbin
Next Armed robbers intimidating residents of Sokoban Newsite