According to preliminary data made public by the Ghana Statistical Service, the country’s economy expanded by 4.8% from April to June 2022 compared to the same time last year.

The real GDP of Ghana expanded by 1.1% in the second quarter of 2022 (April to June), which is 0.2 percentage points more than the growth seen in the first quarter of 2022 (January to March).

According to government statistician Samuel Kobina Annim, the manufacturing, crops, mining and quarrying, information and communication, and education subsectors were the primary forces behind GDP growth for the second quarter of 2022.

In the second quarter of 2022, the real real quarterly gross domestic product (QGDP) growth rate, which includes oil and gas, is 4.8% (year on year).

The fastest-growing sector was the services sector, which saw growth of 5.2%. The agriculture and industry sectors both had growth of 4.6% and 4.4%, respectively. 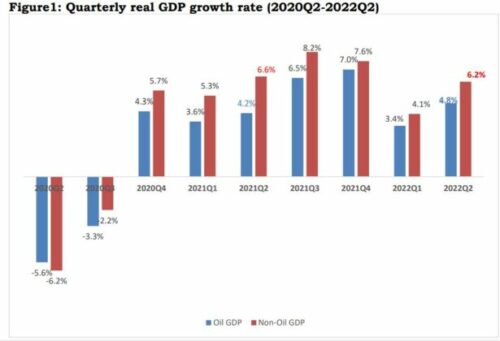 As the economy struggles against the backdrop of greater inflation, tighter financial conditions, and poorer growth, Ghana is in a race against time to get a bailout program.

Due to a decline in the cedi, the country’s inflation rate increased to its highest level in 21 years in August.

A $3 billion package from the fund is desperately needed by Ghana to support its economy.

Previous You have no moral right to criticize the government if you don’t pay tax – MCE fumes
Next Police offer a Ghc100,000 reward for information regarding the Wa murderers