For the 2022/2023 cocoa production season, the government has increased the producer price for cocoa beans by 21% to Ghc 800.

This is less expensive than Ivory Coast, which listed its pricing for the same season at around $858.

A bag of cocoa cost 660 Ghana cedis prior to the announcement.

The new pricing structure will be in place starting on Friday, October 7, 2022.

Dr. Owusu Afriyie Akoto, the minister of agriculture, stated during a news conference that the government was unable to raise the percentage above 21% due to the depreciation of the cedi versus the dollar.

“This year’s cedi depreciation is something we are all aware of.

As a result, the administration will need to make some concessions, he said.

According to Dr. Akoto, the government’s determination to guarantee farmers a respectable income and make cocoa cultivation profitable is evidenced by the 21% increase in the producer price of cocoa.

He emphasized that the government will keep carrying out programs to create a strong, resilient, and sustainable cocoa business that would benefit cocoa growers and the communities in which they live.

From November 2022, the government will transition the Cocoa Farmer’s Pension Scheme from the pilot phase to the implementation phase in order to guarantee a respectable quality of life for Ghanaian cocoa farmers after retirement.

The program is still a historically significant accomplishment under President Akufo-Addo. 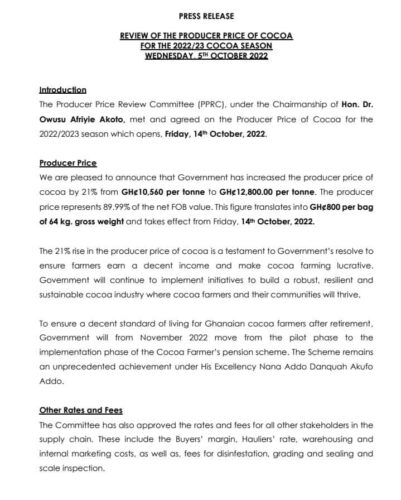 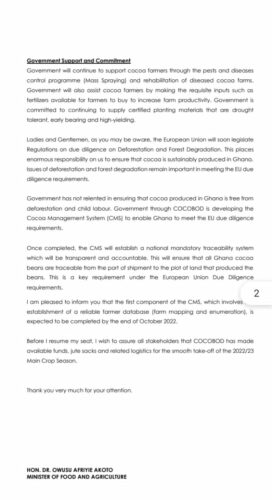