The government has boosted basic pay by 30% for the fiscal year 2023 as a result of multiple talks with Organized Labor.

Beginning on January 1, 2023, the increase will be in effect.

This comes after a meeting with organized labor on January 12 following eleven rounds of fruitless discussions.

“The base pay has been increased by 30% for the 2023 financial year…As I said this brings to an end the 2022 COLA of 15% of base pay salary,” Ignatius Baffour-Awuah, the minister of employment, made the announcement immediately after the decision was made.

Organized Labor initially requested a 60% percent increase and held firm to that demand despite several interactions with the government throughout the base wage discussions.

The public sector employees chose to lower their initial 60% demand to 58% after rejecting the government’s initial 18% offer.

Organized Labor did, however, agree to a 30% rise in the basic wage following their meeting with the government on Thursday, which also included Finance Minister Ken Ofori-Atta, who had skipped all prior meetings.

Dr. Yaw Baah, the General Secretary of the Trades Union Congress (TUC), thanked the government for this remarkable advancement.

“The Leadership of organized Labour would like to express our sincere thanks to government for granting 30% increase in base pay for 2023 for public sector workers. We are happy that it has ended peacefully today. The 30% even though it is not what we want, it will create that opportunity for us to speak one language to work together.”

Dr. Isaac Bampoe-Addo, executive secretary of the Civil and Local Government Staff Association of Ghana (CLOGSAG), assured the delegation of the government that “we will collaborate with them to develop ideas to improve revenue generation. We know the next time we meet for base pay negotiations, it will be a better story.”

The increase will strain the nation’s budget, the finance minister said at the meeting.

“As I stated, this would put a strain on the budget, but we are certain that we would increase productivity and the promise that we both have made to ensure that there is peace in this nation as we look at pension and labor concerns,” Ken Ofori-Atta added.

The government said that by making this decision, the 15% Cost of Living Allowance (COLA) for public sector employees has ended.

Read the agreement below: 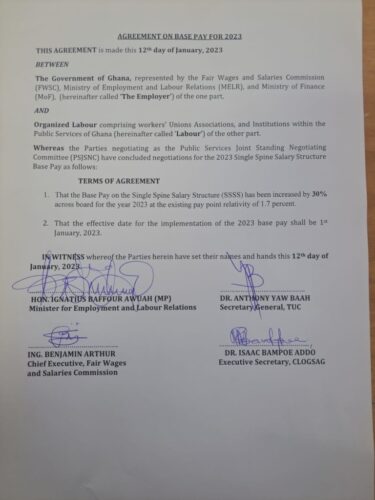