Gabby Otchere-Darko, the founder of the Danquah Institute (DI) and a prominent figure in the ruling New Patriotic Party (NPP), has stated that the administration and the Ministry of Finance (MoF) deserve praise for the way they have managed the nation’s economy despite the ongoing difficulties.

Following the government’s signature of an agreement with 13 Participating Financial Institutions, Mr. Otchere-Darko made this statement (PFIs).

The arrangement is meant to aid in the execution of the GHS10 billion YouStart entrepreneurship program’s commercial component.

The creator of DI believes that the government deserves praise for continuing to pay salaries and carry out its numerous operations despite the difficulties.

The Akufo-Addo government, and in particular, the MoF, deserve the nation’s praise for their handling of the economy in these most difficult times, Mr. Otchere-Darko wrote in a tweet on Thursday, September 22, 2022.

“Despite slump in revenues, bills are being paid, including salaries, roads being fixed, & money found for programmes like YouStart.” 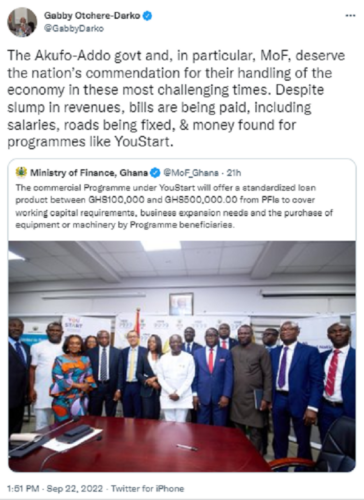