After only three games in the 2022–23 Ghana Premier League, head coach Samuel Boadu of Hearts of Oak resigned from his position with the team.

Due to the season’s terrible start, the former manager of Medeama SC is under a lot of pressure.

Hearts of Oak hosted Great Olympics in their second game of the campaign, which finished 1-1 at the Accra Sports Stadium.

The Phobians travelled to the Baba Yara Stadium for their match against Asante Kotoko in week three.

Boadu, who guided the team to a treble in his first season at the club, has departed his position as a result of the season’s shaky start.

After a turbulent start to the season, the 36-year-old and his backroom staff were instructed to skip the team’s Tuesday training session.

After three games, Hearts of Oak have two points, placing them 13th in the league.

When Hearts of Oak plays Bibiani Gold Stars on Saturday at the Accra Sports Stadium in the matchday 4 games, they will be attempting to earn their first victory of the year.

Hearts of Oak officially this afternoon tweeted on their official page below: 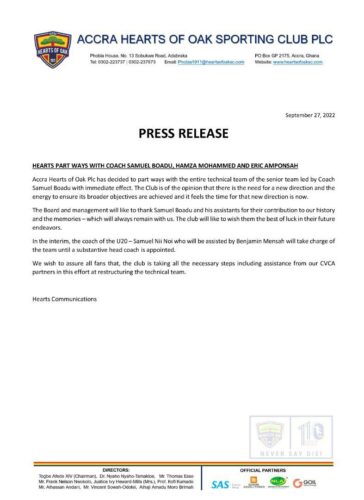