The Ghana Police have revealed that the Deputy Regional Commander in the Ashanti Region, DCOP Kwasi Akomeah-Apraku has been removed and two other officers following the shooting incident at the Islamic Senior High School in Kumasi on Monday June 13.

This comes after the Inspector General of Police Dr George Akuffo Dampre led a team to the area to assess the situation.

Portions of a statement issued by the Police after the IGP’s visit said “It was further established that even though nobody was hit by a bullet the Police handling of the incident was poor and fell short of our standard operating procedure on crowd control.”

38 students of the Islamic Senior High School were rushed to the hospital after the police allegedly fired tear gas and live bullets to disperse students who were demonstrating over incessant vehicular knockdown.

“Tonight, the preliminary report has been released.” A statement signed by Police Director of Public Affairs, Grace Ansah-Akrofi explained that “even though nobody was hit by a bullet, the Police handling of the incident was poor and fell short of our standard operating procedure on crowd control.”

Worried parents stormed the school to demand for the release of their wards on Monday June 13.

The affected students were conveyed to the Komfo Anokye Teaching Hospital (KATH) and other hospitals in Kumasi.

The reports indicate that the students took to the streets and blocked the road but the police tried to disperse a crowd of the students when they were demonstrating thereby leading to at least 30 students collapsing. 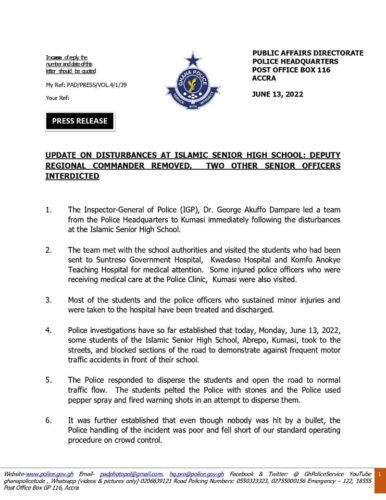 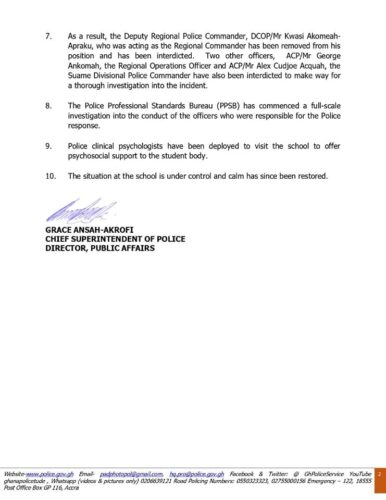