The discovery that $100 million had been taken from petroleum revenues for unauthorized expenses disturbs former president John Dramani Mahama.

He maintains that there is no defense for transferring funds from the country’s portion of petroleum resources into any other account other than the Petroleum Hold Fund (PHF).

The PRMA (Act 815)’s Section 3 “explicitly stipulates that all Petroleum revenue owing the Republic received from whatever source will be assessed, collected, and accounted for by the Ghana Revenue Authority,” according to him, and thus amounts to a violation of that section.

“Section (15) of the Petroleum Exploration and Production Act (Act 919), is also clear that “Any borrowing exceeding the cedi equivalent of thirty million United States Dollars for the purpose of exploration, development, and production shall be approved by Parliament and shall be in consonance with the Petroleum Revenue Management Act,” Mahama stated on his Facebook post.

Since “there is no record to confirm parliamentary approval on any such loans acquired by GNPC in their work programme,” he requested that the Minister of Finance promptly refund all such unauthorized payments into the PHF.

The whereabouts of more over $100 million accumulated from Ghana’s petroleum lifting in the first quarter of 2022 concerned the Minority in Parliament last week.

The Jubilee and TEN fields’ earnings was transferred to a corporation without the consent of Parliament, according to a statement from the Minority.

The Minority further asserted that the Finance Minister had “quite covertly and opaquely” transferred shares from the Occidental (Oxy) sale in 2021 pertaining to the Jubilee and TEN Fields to an offshore firm known as JOHL. 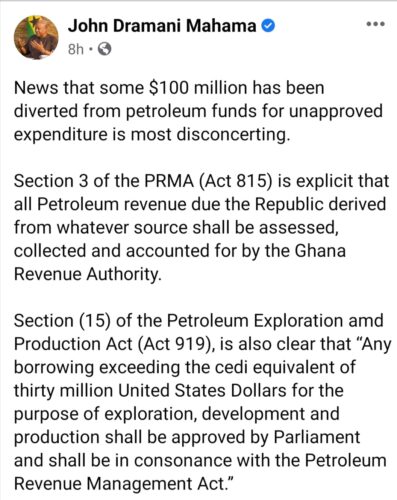 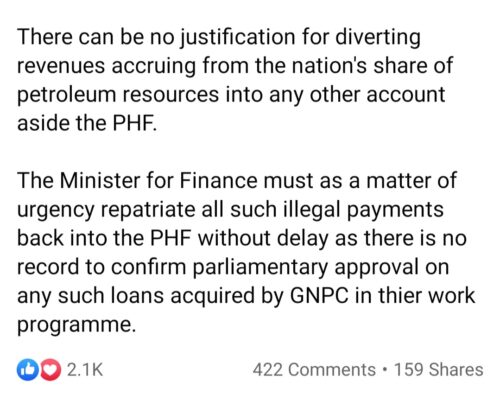