The Education Minister, Dr. Osei Yaw Adutwum, introduced the Vice President, H.E Alhaji Dr. Mahamadu Bawumia, who led the Inductee, Dr. Kwame Addo Kuffour, to swear two Oaths of office. First was the Oath of Allegiance, and then the Oath of Secrecy. Dr. Addo Kuffour then appended signatures to both documents in acceptance of his new role as the first Chancellor of the University.

Delivering his Keynote Address, the Vice President congratulated the astute politician and academician, Dr. Kwame Addo Kuffour, for such an untainted career. He described Dr. Kwame Addo Kuffour as a man of integrity and a mentor, and assured the gathering that he is of firm belief that Dr. Addo Kuffour would lead Kumasi Technical University in training skilled workforce under the much revived and improved TVET program who would help Ghana live up to its motto ‘ _Development In Freedom’._ 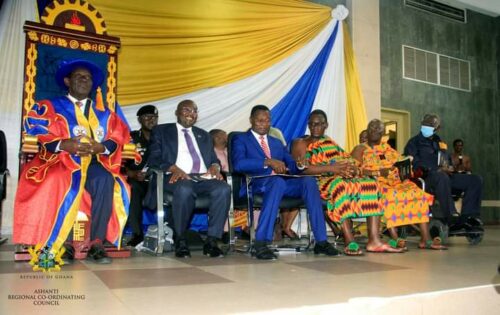 The occasion was graced by H.E the Fmr. President of Ghana, John Agyekum Kuffour, the Asafo Hene who represented the Asantehene, Otumfour Osei Tutu II, the Fmr Speaker of Parliament, Rt Hon. Prof. Aron Mike Oquaye, the Akyempemhene, the Ashanti Regional Minister, Hon Simon Osei Mensah, The Vice Chancellor and the Governing Board Chairmen of Kumasi Technical University, Members of the Governing Board, Staff, Members of Parliament, Nananom and the Clergy.

Dr. Addo Kuffour, until his investiture had served in many enviable capacities both as a Consultant Medical Practitioner and a politician. Notable amongst them are;  President of the Ghana Medical Association, Member of Parliament for Manhyia Constituency, Minister of Defends of Republic of Ghana, Board Chairman of the Social Security and National Insurance Trust and the Suame Magazine Industrial Development Organisation.(SMIDO) 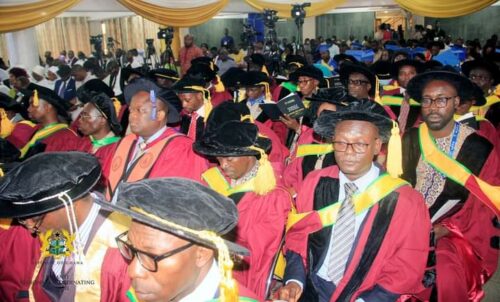 Later in the day, Majority Leader again joined the President of the Republic, H.E Nana Addo Dankwa Akufo-Addo, and the Minister of Agriculture, Dr. Owusu Afriyie-Akoto, to commemorate the centenary anniversary of the Agricultural College at Agric Nzema within the Kwadaso Municipality of the Ashanti Region.

The College, established in 1922, celebrated its 100years of existence.

Addressing the gathering, President Nana Addo Dankwa Akufo-Addo underscored the excellent role the college has played in training the middle-level manpower needs for the growth of the agricultural sector, which ostensibly is the backbone of Ghana’s economy.

He pledged his government’s continuous support towards improving infrastructural needs of the college which has been occasioned by increase in enrollment over the years.