The Court presided over by Her Honour, Priscilla Dapaah Mireku,gave her verdict after Yakubu pleaded guilty for inflicting cutlass wounds on the victim and was subsequently convicted on her own plea.

According to prosecution, the incident occurred on 19th July,2022 at Dichemso Diamond Hotel, a suburb of Kumasi in Ashanti Region.

The godmother of the prostitutes at Dichemso who normally brings girls from Nigeria with the idea of getting them greener pastures in Ghana that normally turns out to be prostitution, who attacked the victim for reportedly taking her well known boyfriend in Dichemso ‘Luda’, suffered razor wounds on her face, thighs, and vagina during an attack with one commercial sex worker and two boys of Dichemso Old Town in Kumasi who are on the run.

Bella and his boyfriend Luda below.

Bella, the suspect, was arrested by the Airport Police, and efforts are being made to apprehend her three (3) escaped co-conspirators.

Injured Cherish at KATH for treatment below 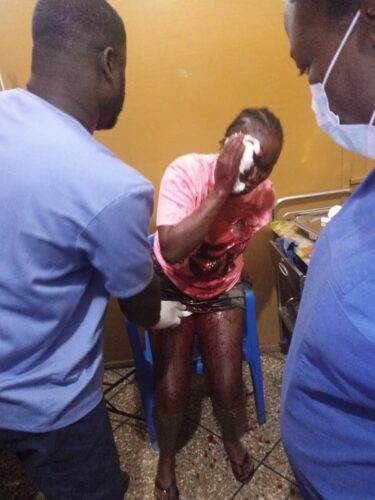 The victim, Ruth alias “Cherish,” was treated at the Manhyia Government Hospital but she was later referred to Komfo Anokye Teaching Hospital Emergency Unit(KATH) before being released, but she is still recovering from her injuries.

The prosecutor reported that Bella had earlier warned Ruth that she would “design her face with razor and cut off her vagina then put pepper in her vagina then break her phone before sending her back to Nigeria” if she does not stop chasing a his boyfriend ‘Luda’ who has been her topmost customer.

Ghanatodayonline.com editor Louis Gyamerah in an interview with wounded Cherish she said “they accosted her at the forecourt of Diamond Hotel when one of the guys called him to meet him around 11pm but she didn’t know that it was a plan thing so they threw her to the ground smashed her phone; three of them held her by the legs and arms while, Bella cut her with the sharp razor(blade). She succeeded in opening deep wounds on her face, thighs and pasted grinded pepper in her cut wound in her vagina”

Cheirsh at KATH Emergency Unit for treatment below: 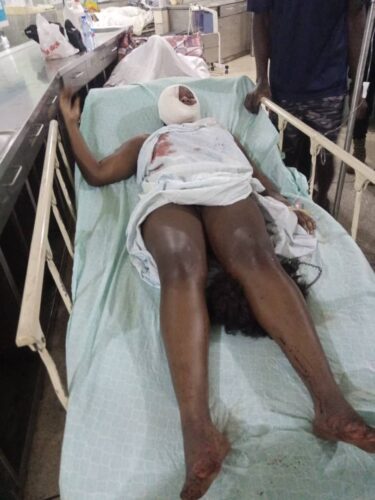 “I was having almost Ghc 1,000 on my Mobile Money so they sent the SIM card to Ashtown to  a disable who was able to withdrew the money and left only Ghc 2 and even changed my pin code I got good Samaritans who send me to a clinic at Dichemso but they couldn’t do anything so I walked to the road side and met someone who speaks Hausa and in the cause of explaining the situation the Police with Okada came and took me to Manhyia but they referred me to the big hospital” Cherish added.

According to other accounts, the victim, Ruth, is a university student on vacation in Nigeria who has been brought to Ghana by the assailant, Bella, to indulge in the illicit sex trade in order to raise some money to cushion her when school resumes.

Prior to the ruling as required by law on women, a pregnancy test carried on Yakubu proved negative. She is to be deported after serving her five-year sentence.