Nurses at the Manhyia government hospital will start a sit-down strike starting today, Friday, December 2, in protest of the failure to fire the Ashanti Regional Director of the National Service Scheme (NSS).

The strike will intensify on December 6 if the NSS regional director, Mr. Alex Opoku-Mensah, is still in charge, according to the organization leading the strike, the Ghana Registered Nurses and Midwives Association (GRNMA).

If their demand is not satisfied, the Association further stated in a statement that nurses will go on strike countrywide by Friday, November 9, 2022.

The NSS administration has suspended Mr. Opoku-Mensah awaiting investigations, but the GRNMA is dissatisfied.

They want him fired from his position as a result of entering the Manhyia Government Hospital and insulting an on-duty nurse. 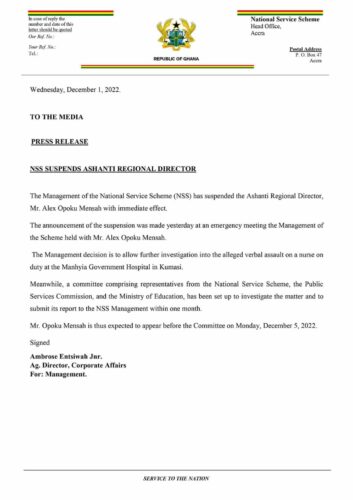 After the nurse questioned the house officer about anything, Mr. Opoku-Mensah went to the hospital to argue with the nurse on behalf of his daughter.

The nurse is thought to have called Mr. Opoku- Mensah’s daughter from her own phone and asked her to come to the hospital so she could change a patient’s prescription order in the E-Health System and prevent the patient from being charged for medications that were never given to them.

The nurse’s phone interaction with Mr. Mensah’s daughter left her feeling insulted, although it is unclear how she was spoken to.

Then, after accompanying his daughter to the hospital, Mr. Opoku-Mensah was caught on tape criticizing the nurse and threatening to arrange for her expulsion.

He continued by claiming that his daughter was smarter than the aforementioned nurse and threatening to defend her in the hospital if she ever felt threatened by anybody there.

The GRNMA declared that Mr. Mensah lacked authorization to enter the hospital and assault a nurse.

The organization said that as the NSS’s regional director, he should have known that the Manhyia District Hospital’s management should have been approached with a complaint rather than storming the building and attacking the nurse.

Mr. Opoku-Mensah has now expressed regret for his behavior.