Kofi Baah Agyepong, the Deputy Director of Communication at the Presidency, has been selected by President Akufo-Addo to serve as the Youth Employment Agency’s acting CEO (YEA).

Mr. Justin Kodua Frimpong, who resigned to concentrate on his position as the General Secretary of the New Patriotic Party, is succeeded by Mr. Agyepong (NPP).

According to a letter dated August 9th, 2022, and signed by Nana Bediatuo Asante, Secretary to the President, the appointment is effective as of August 10th, 2022.
“Further to the resignation of Justin Kodua Frimpong as the Chief Executive Officer of the Youth Employment Agency and in accordance with Section 12(1) of the Youth Employment Agency Act, 2015 (Act 887), the President has appointed you to act as Chief Executive Officer of the Agency, pending receipt of the constitutionally required advice of the governing board of the Agency, given in consultation with the Public Services Commission,” the appointment letter signed by Nana Asante Bediatuo.

Read the appointment letter below: 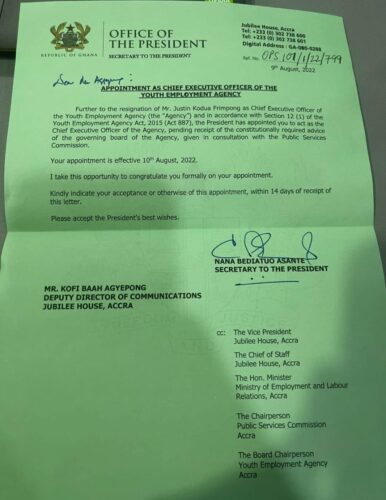 A prominent member of the NPP and well-known in the Ghanaian media, Kofi Agyepong is a political communication consultant.He graduated from Leicester University in the United Kingdom in 2019 with a Master of Arts in media and public relations.

Agyepong studied at the Africa University College of Communications from 2008 to 2010, graduating with a Bachelor of Arts in communication studies in 2010.

Between 2000 and 2002, he attended Kumasi High School, where he graduated with a senior high school diploma.

Agyepong was a prolific writer for the Guardian in the UK and the Graphic Sports newspaper in Ghana as a credentialed journalist with academic training.

He belongs to the Public Relations and Communications Association (PRCA), the largest professional PR organization in the world.

Agyepong was a prolific writer for the Guardian in the UK and the Graphic Sports newspaper in Ghana as a credentialed journalist with academic training.

He belongs to the Public Relations and Communications Association (PRCA), the biggest organization for PR professionals in the globe.

Previous Mahama calls for national dialogue on Ghana’s economy
Next “Your exceptional leadership in West Africa appreciated by the US” – USA Ambassador to Prez. Akufo-Addo