As part of a three-day visit to the Eastern Region, the President of the Republic, Nana Addo Dankwa Akufo-Addo, on Saturday, October 22, 2022, officially opened the Nsawam Skills Acquisition, Vocational and Reformation Camp Prison.

The building includes fully furnished dormitory blocks for the inmates with a capacity of 320, a skills training center for carpentry and tailoring, a state-of-the-art ICT lab, an administration block, a chapel (which will also serve as a classroom), a kitchen, a dining hall, laundry, inmates’ restrooms, seven (7) sentry posts, two (2) mechanized boreholes, offices, an infirmary, a visitors’ lounge, a shop. 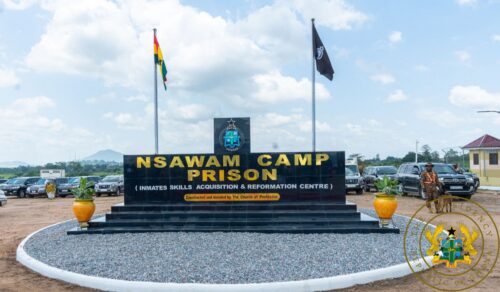 President Akufo-Addo said, “This is an example of the collaboration between the Church of Pentecost and the government,” in his remarks to the crowd. 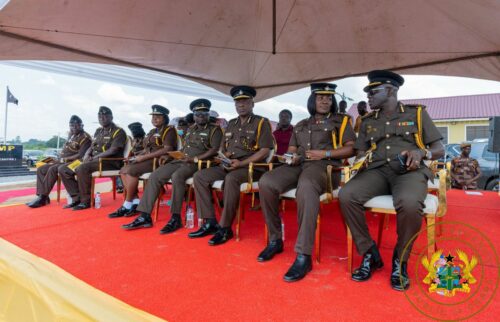 We saw it at the height of the COVID crisis, when the church made use of its facilities in the Gomoa Fetteh neighborhood and coordinated the distribution of food to those in need.

It demonstrates this church’s dedication to helping our country’s socioeconomic challenges find solutions.

He indicated that “the church of Pentecost, by what it has done here today, has demonstrated exceptional leadership in its desire to maintain and grow a partnership with the state to address the problems of our nation. The second of such facilities that are being constructed by the Church of Pentecost, and there are 3 others as Apostle Nyamekye indicated in the pipeline, per my understanding, and at least 2 of them will be commissioned by the end of this year.” 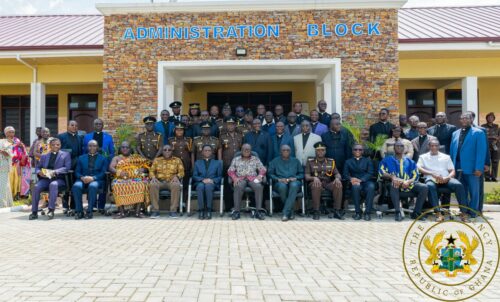 He said, “I can say with confidence that this ceremony is the highlight of my 3-day working visit to the region. I say so because we’re witnessing today, a very important example of the collaboration that we seek in this country, between government and several stakeholders in our nation, civil society organisations, faith-based organisations and independent institutions in our nation.”

“Apostle, your leadership of the church has already been commended by the General secretary, I want to add my voice to that commendation, about the sterling work that you’re doing in the name of Christ and the Christian community in our country, it’s exceptional and we must recognise it.”

Apostle Eric Nyamekye, the chairman of the Church of Pentecost, claimed that the Ejura Prison camp project, built last year, is already paying off in various ways. 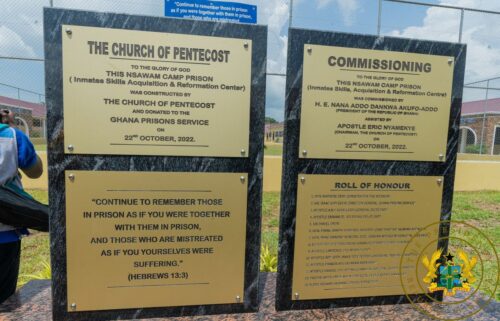 Many of the prisoners were already trained in the facility and were later released.

He said this vision of the Church “is hinged on a three-pronged approach, one of which is partnering with Government for the socio- economic development of the nation. As a church, we believe that we have not only been called to worship God but to also, serve God’s purpose within the society. It is from such a conviction that we are gathered here to commission this prison camp project,” he added.

Apostle Nyamekye noted that “prison overcrowding is one key contributing factor to poor prison conditions around the world. It is also arguably the biggest single problem facing prison systems. Such overcrowding and associated challenges prevent prisons from fulfilling their proper functions.”

The Ghana Prisons Service, he stated, is experiencing acute overcrowding in its holding facilities across the country. Available statistics at the time of crafting our vision 2023 strategic document in 2018, indicated an overcrowding rate of 50.43% (i.e., 50.43% beyond the normal capacity).”

“As of last Thursday, 20th October, 2022, there were a total of 14,957 inmates in our prisons, as against the maximum capacity of 9,850. Using the Nsawam medium security prisons as a case in point, Mr. President, this holding facility was built to hold a total of 850 prisoners, but currently, the facility is holding 3,187 prisoners. This represents over 275% above the required capacity.”

Previous All hands must be on deck in the fight against galamsey – COKA
Next Cedi Depreciation: Let’s stop the negative speculations – COKA to Ghanaians