The President of the Republic, Nana Addo Dankwa Akufo-Addo, received the chieftancy title of “Yelemanga Naa,” which translates to “Chief of Truth,” from the Chiefs and residents of the Daffiama-Bussie-Issa Traditional Area on Tuesday, August 23, 2022.

As part of his two-day tour of the Upper West, President Akufo-Addo visited the town to check on the status of construction on the Agenda 111 Hospital Project in the Daffiama-Bussie-Issa District.

The award, in the words of the area’s Paramount Chief, Naa Yelekuang Bawiele, is in recognition of the President’s extensive development initiatives since he took office in 2017, which is an adherence to the promises he made to the residents of the area during the electioneering campaign period.

The Issa Health Centre, which was a CHPS Compound at the time, should be upgraded to a district hospital, Naa Yelekuang Bawiele said in her speech to the group about the finished and ongoing projects in the area. 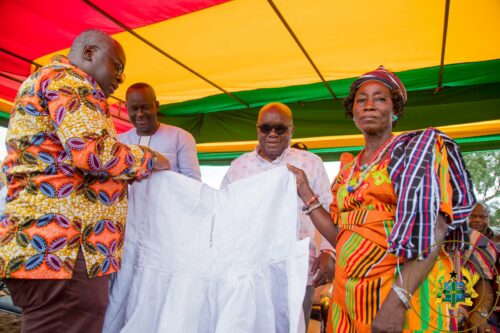 Since 2019, it has been promoted to a Polyclinic status.

There has never been one since the district was created in 2012 because neither a district hospital nor a polyclinic existed.

Plus, he added, “you (President Akufo-Addo) promised to give the Issa Youth Leadership Training Institute a bus, and you did exactly that, and the school has now been upgraded into a Technical Institute under TVET.”

“Thanks to your leadership, the District Assembly, headed by the DCE in partnership with the Catholic Church, established a Senior High School here about two years ago,” the Chief continued.

On roads infrastructure he said, “we also requested for the tarring of the Issa Town Roads and you delivered” adding that, “the district capital now has a tarred road and more importantly Fian-Wogu road, Issa Kojokperi – Wahabu – Wellembelle road are also under construction.”

We are also aware of your government’s partnership with the European Union to build some roads and markets in the district, he continued. The Fian-Owlo-Daffiama Road and the Wogu-Saamanbo Road are notable examples of this.

You are all aware that Chiefs abstain from political politics. Everything I’ve mentioned is based only on verifiable facts and is unrelated to politics.

On his part, President Akufo-Addo gave them assurances about his will to see to it that necessary development projects are equally spread across the nation, especially the Upper West region.