Regarding corruption at the NDA, Special Prosecutor invites the Coordinator for Special Initiatives at Jubilee House

The Northern Development Authority (NDA) awarded A&Qs Consortium a contract for consulting services under the Infrastructure for Poverty Eradication Program, and the Office of the Special Prosecutor has started an inquiry into possible corruption and crimes related to corruption.

The Special Prosecutor indicated that the investigation is focused particularly on the amount of the contract sum.

The Controller and Accountant General have also been instructed by the Special Prosecutor to immediately halt all payments resulting from the deal.

Several current officials, including the Chief Executive, the Coordinator for Special Initiatives at Jubilee House, as well as key former NDA and A&Qs Consortium officers, have all been invited for questioning.

All of the guests have been released on bond.

The statement also said that anyone found guilty of a crime involving corruption or a crime related to corruption would be charged and tried in front of the High Court. 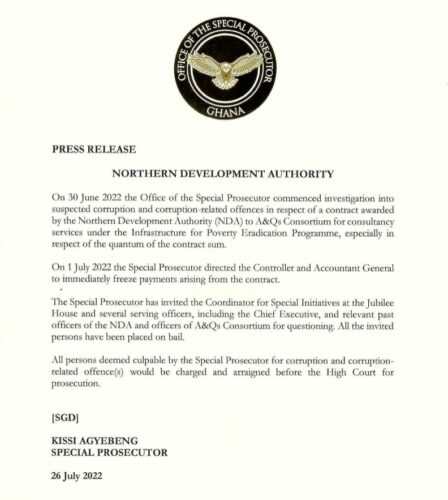