“GAF wishes to state categorically that there are no military personnel deployed for such activities and no Soldier is providing security for any mining company in any forest reserve in any part of the country,” it said in a statement.

The army asserts that the charges were falsely made in a documentary that was broadcast on Joy News.

“Mentiahene of Bekwai, Nana Kusi Frempong Kotobre, asserts that military men are providing security for an illicit mining enterprise operating in the Kobro Forest in Amansie Central in a video containing some recycled information of previous unproven charges that have subsequently gone viral.”

The army also reported that several individuals were rounded up while wearing uniforms with US military camouflage patterns and working for a commercial security company.

The document claimed that a licensed small-scale mining operation called “Elvis and Co Mining Ltd” had hired the individuals.

“These private security guards should not be misconstrued as GAF personnel because their camouflage pattern uniforms are even totally distinct from GAF.”

The army added that it had apprehended a number of impersonators and turned them over to the Police for prosecution.

The army declared it would continue to be steadfast in the fight against illegal mining despite the renewed focus on the issue.

In order to increase its surgical operations to stop the loss of forest reserves and contamination of river bodies, GAF has therefore revised Operation Halt II. 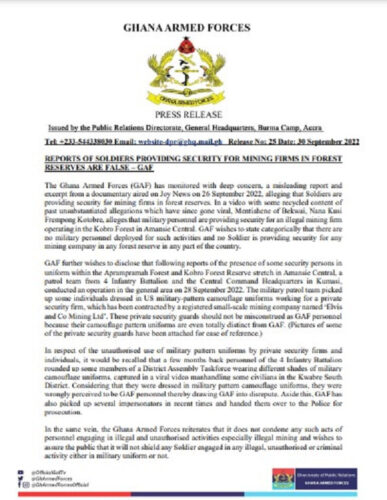