Four employee unions in Ghana’s public universities have stated that they will not end the current sit-down strike they started on Monday, October 17, 2022, to demand better working conditions.

The unions made this disclosure in a statement that was released on October 25, 2022, and was co-signed by the national presidents of UTAG, Prof. Solomon Nunoo, GAUA, Dr. Beth Ofei-Awuku, SSA-UoG, Mr. Isaac Donkor, and TEWU-Gh, Mr. Sulemana Abdul-Rahman.

The Fair Wages and Salaries Commission invited the National Leaders of UTAG, GAUA, SSA-UoG, TEWU-GH, and FUSSAG to a meeting with the Employer on Wednesday, October 19, 2022, according to the announcement (FWSC).

The Employer was emphatic that the Vehicle Maintenance and Off Campus Allowances be restored to the modified ex-pump rate of GHS10.99, therefore regrettably the meeting’s outcome was unfavorable.

Later that afternoon, the National Leaders attended a hearing at the National Labour Commission (NLC), where the Commission again pleaded with the parties to continue talking in accordance with the instruction contained in its letter dated October 20, 2022.

The national leaders are of the considered opinion that the Commission should have had no trouble issuing a specific order against the Employer to pay amounts based on figures that have been agreed upon and set by convention, however, after considering the facts and evidence in front of it.

“Thus, at their individual meetings, the National Executive Committees/Councils of the Labour Unions voted to continue the ongoing strike action till further notice,” the statement added. 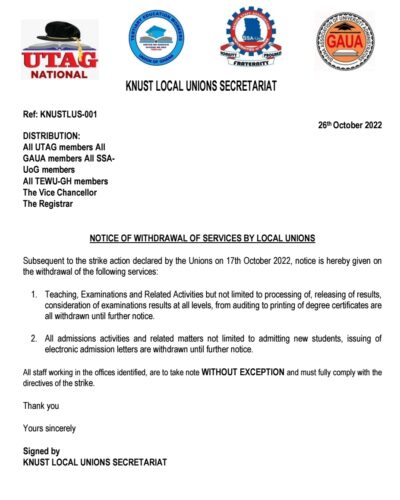