The one-week celebration of Ghanaian veteran actor Prince Yawson, aka Waaky is set to take place on Friday, August 26,2022.

This news was revealed by actor Bob Smith Jnr aka Diaboloman a friend of Waakye.

The celebration will take place at the Accra Tourism Information Center which is close to the flagstaff house. 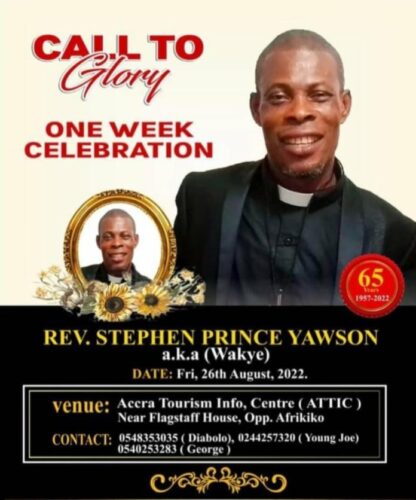 Waakye died on Tuesday, August 2, 2022 at 37 Military hospital between the hours of 1-2pm/ his death caused sadness to his fans and fellow actors in the movie industry.

Waakye is said to have fought for his life even before being admitted to the hospital as attempts to find him a bed in certain capital-area hospitals proved fruitless.

However, Waakye was transferred to the 37 Military Hospital from Ridge Hospital owing to a lack of available hospital beds, according to Grace Omaboe, also known as Maame Dokono.

The actor, better known by his stage name “Waakye,” has appeared in a number of important Ghanaian films.

The actor verified rumors about his illness in October 2020 but stated that God had cured him.