President Nana Addo Dankwa Akufo-Addo, says all countries around the world are working to return themselves to a state of normalcy following the devastating impact of the pandemic of COVID-19, whose effects have been exacerbated by the Russian invasion of Ukraine.

According to President Nana Addo Dankwa Akufo-Addo, all nations are attempting to regain normalcy in the wake of the terrible COVID-19 epidemic, the effects of which have been made worse by Russia’s invasion of Ukraine.

The economy has entered a recession, there have been business failures, and lives and livelihoods have been disturbed, according to President Akufo-Addo.

As pressures for inflation both domestically and globally build, food and fuel prices have substantially increased. 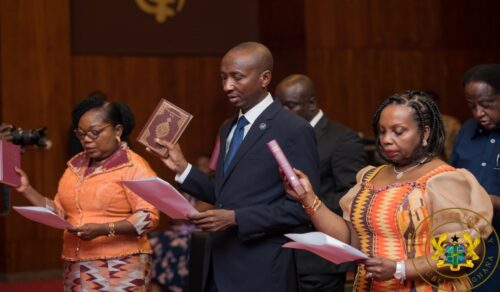 Hopefully, the world will make up for lost time sooner rather than later.

The President of Ghana said, “In our case, we have decided to seek the collaboration of the International Monetary Fund (IMF) to repair, in the short run, our public finances, which have taken a severe hit in very recent times as a result, while we continue to work on the medium to long-term structural changes that are at the heart of our goal of creating a Ghana Beyond Aid,” while swearing in 10 ambassadors and high commissioners at Jubilee House on Thursday, 7th July 2022.

He was sure we would succeed because of our “commitment, hard work, unity, and the traditional Ghanaian sense of entrepreneurship.”

Yes, this will pass too.

President Akufo-Addo told the Ambassadors and High Commissioners that the twin events of COVID-19 and the Russian invasion of Ukraine have emphasised the need for stronger ties of co-operation and bonds of friendship around the world.

“No country can afford to go it alone, we either succeed together or we perish together. And this is where your work as Ambassadors and High Commissioners will be needed the most,” he added.

The President, thus, urged them to familiarise themselves with the objects of the Ghana CARES ‘Obaatampa’ Programme, which sets out Ghana’s roadmap towards the strong revitilisation of the Ghanaian economy.

Part of their responsibilities, at the multilateral level, President Akufo-Addo added is for them to work with the governments of their accreditation to assist in the prosecution of their common agenda in the fight against the scourge of armed conflicts, terrorism and violent extremism, the threats of climate change, and the illicit flow of funds from Africa.

“Whilst at it, you also have the onerous responsibility of promoting the image of a country whose reputation amongst the comity of nations continues to be high. You represent a country that, as a result of the commendable conduct of the Ghanaian people, is regarded as one of the most stable on the African continent,” he said.

President Akufo-Addo continued, “At your respective duty posts, you must strive to develop cordial working relations with the professional Foreign Service officers you will find at your duty posts. They have invaluable experience and knowledge of the terrain, which should help you work effectively. You will need their assistance, and they will need your guidance and leadership”.

President Akufo-Addo noted that “they have distinguished themselves in their various fields of endeavour and in the public service of our country, and are eminently fit to represent Ghana in their respective places of accreditation, which have expressed satisfaction at their appointments. I congratulate each one of you warmly on your well-deserved appointment, and I am confident you will make our nation proud.”