According to Kristalina Ivanova Georgieva-Kinova, Chair and Managing Director of the International Monetary Fund (IMF), her organization is ready to help Ghana improve its economy.

This was announced by the economist from Bulgaria in a tweet on Friday, August 26, 2022.

She claims that after having a “productive meeting” with the finance minister, Ken Ofori-Atta, and his group, the IMF decided to back Ghana.

She stated that the discussion at the meeting focused on Ghana’s economic problems and solutions.

We are ready to do our part to help the authorities stabilize the economy, lay the ground for stronger growth & help the most vulnerable”, the tweet said. 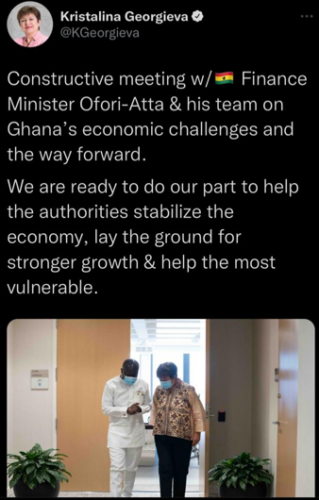 The IMF Chair’s guarantees come at a time when the nation’s economic future seems precarious.

The Vice President, the Finance Minister, and the Bank of Ghana were among the important parties the IMF met with during its fact-finding visit to Ghana, which was completed in July.

Fitch Ratings recently lowered Ghana from B- to CCC.

Within six months, an agreement with the IMF should be in place, according to Fitch.

Additionally, it calculates that Ghana might gain access to up to $3 billion in funding and free up budget support from other multilateral lenders.

Many Ghanaians are complaining about the Ghana Cedi, their country’s currency, which is currently rapidly weakening against the US dollar.

Along with the rising cost of living, inflation is also on the rise.

These elements were among a number of issues that caused Ghana to request aid from the IMF on July 1, 2022.

The decision to approach the IMF is intended to aid the global lender in supporting the government’s implementation of some economic recovery programs, according to a statement by the information minister, Kojo Oppong Nkrumah.