The Police have arrested 4 robbery suspects who attacked a mining area at Fenaso Ketewa close to Obuasi, Thursday, June 2, 2022.

The robbers, armed with pump-motion weapons tried to rob the miners of a few gold ore however they have been unsuccessful. They, however, have been capable of make away with fifty litres of diesel. 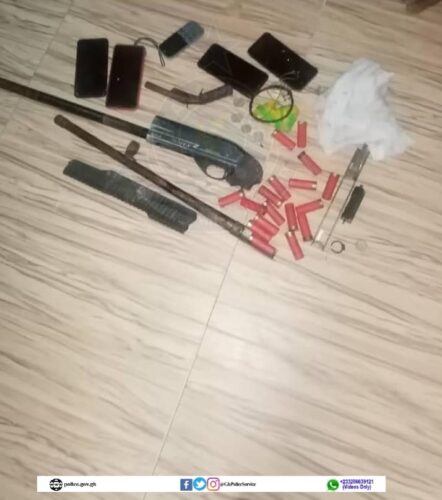 A unique intelligence-led operation carried out with the aid of using the Police brought about the arrest of suspects, Porideme Moses, Boadi, Agya Owusu and Osofo at their hideout. One other suspect, Mallam, who opened fire at the Police crew sustained gunshot wounds and died upon arrival on the hospital.

Items retrieved from them consist of a Magazine made pistol, a pump-motion gun, nine (9) BB live cartridges, eight (AAA live cartridges and the fifty litres of fuel.

All the suspects are in custody and may be arraigned to stand justice.