“Africa is ready for business” – President Akufo-Addo to investor community

“Our message to the global investor community is, therefore, this: Africa is ready for business. Africa needs you and you need Africa. You need Africa because Africa is busily building the world’s largest single market of 1.3 billion people. Soon we will have a customs union, and soon we will have a continental payment system that will accelerate and facilitate trade amongst ourselves.”

When speaking during the 77th Session of the United Nations, which is taking place in New York, United States of America, President of the Republic Nana Addo Dankwa Akufo-Addo spoke these exact words.

The President said in his speech that Africa views the current geopolitical situation as a chance to rely less on food imports from outside the continent and use our 60% global share of fertile lands better to improve food production.

He claimed, “We have witnessed the disastrous effects of relying on Russia and Ukraine for 70% of our wheat consumption.

We have enough land, water, gas, and labor to provide enough food, energy, and fertilizer for both ourselves and others.

President Akufo-Addo stated that “we cannot do it all by ourselves” in spite of this, and he urged the world’s investors to view Africa as “the new frontier for industry, for technology, and for food production.” 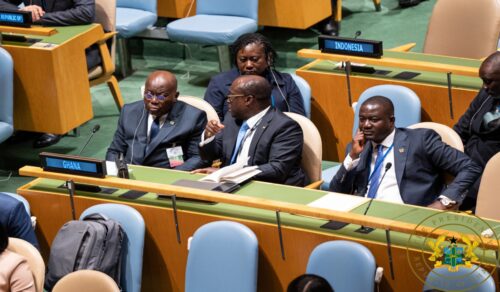 In the case of Ghana, the President told the gathering that his government has launched the successful policy of ‘One District One Factory’ – a policy, with government incentives, that has directly seen, so far, to some one hundred and twenty-five (125) enterprises being set up in various districts across the country, leveraging on each area’s competitive advantage.

“That is why, six years ago, my government embarked on an aggressive policy of planting for food and jobs, which has helped our farmers increase their yields in folds. Indeed, we are recognising that many of the things we import can be found or produced in Ghana, or in other African countries,” he said.

With the Secretariat of the African Continental Free Trade Area located in Ghana, the President stressed that the free trade area is driving intra-Africa trade and creating an unparalleled momentum for Africa’s economic diversity and transformation.”

True to our knowledge that industrialisation is the way to go and, with the single market as the added incentive, President Akufo-Addo indicated that Ghana has taken policy measures to add value to her natural resources.

“For example, we are processing more of our cocoa, refining more of our gold, and we are determined to exploit the entire value chain of our huge lithium deposits. We are busily building an integrated bauxite and aluminium industry and an integrated iron and steel industry, building new oil refineries and have, so far, attracted six (6) of the world’s biggest automobile manufacturers to set up assembling plants in Ghana, prior to producing them in the country,” he added.

In the case of Ghana, the President informed the audience that his government had implemented the successful “One District, One Factory” policy, which, with the help of government incentives, had led to the establishment of approximately one hundred and twenty-five (125) businesses in various districts across the nation, taking advantage of each area’s competitive advantage.

“What we require now is support from the investor community for the rolling out of Africa’s lucrative agro-industry, and for the community to see agribusiness in Africa as much more an opportunity than the perceived, exaggerated risk which has been the false, but dominant narrative,” he added.

President Akufo-Addo instructed the UN to “take proper stock of this project and ask a few searching questions, recognising what could have been done with greater commitment and focus” as a final directive.