En Huang, also known as Aisha, is the subject of a fresh docket because of alleged recent offenses, according to the attorney general.

The Office of the Attorney General and Minister of Justice announced Tuesday afternoon that “the A-G will also re-initiate prosecution in respect of the old offences for which she was undergoing trial before her deportation in 2018.” 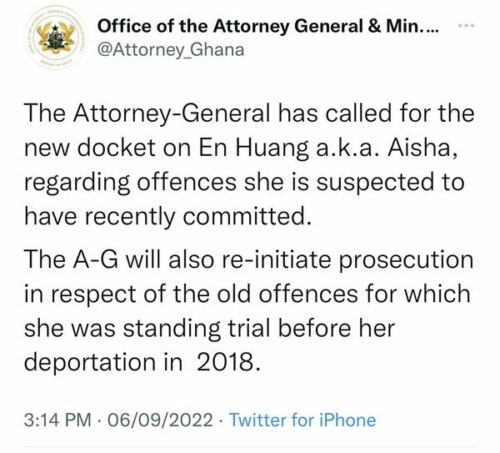 Aisha Huang was expelled from Ghana in December 2018 for violating mining laws, but she returned in January 2022 using a different name.

She is alleged to have obtained a new passport and entered the nation across the border with Togo.

Aisha Huang reportedly returned to her illicit mining operations in Kumasi, Ashanti Region, after obtaining a Ghana Card under a new name—Huang En.

She was detained alongside other conspirators in Ahodwo in Kumasi, and on Monday, September 5, 2022, Samuel Bright Acquah, the judge for Accra Circuit Court 9, remanded her into police detention with instructions to appear again on September 14 of that year.