After the Supreme Court overturned a High Court judgment requiring the investigative journalist to testify behind closed doors in the case Republic vs. Kwesi Nyantakyi, Anas Aremeyaw Anas’ attorneys suggest the journalist may decide to appear as a prosecution witness.

The CEO of Tiger Eye Pi, Anas Aremeyaw Anas, volunteered to testify in place of Ahmed Suale on the condition that he be permitted to do so in-camera or in chambers, according to a statement posted on his Twitter page on Tuesday in response to the Supreme Court decision.

“Anas may choose to testify as a prosecution witness or not,” the statement continued.
“Anas and his Tiger Eye Pi team will continue to wear the iconic face beads as a symbol of impartial anonymity in investigative journalism and to highlight the extreme risk in that line of duty.”

“Anas may choose to testify as prosecution witness or not” the statement added.
“Anas and his Tiger Eye Pi team will continue to wear the iconic face beads as a symbol of impartial anonymity in investigative journalism and to highlight the extreme risk in that line of duty.”

They explained that “the Star witness for the Republic, Ahmed Suale, who was one of the investigative journalists in respect of the documentary, was murdered in Madina, Accra weeks before his testimony could be taken.”

Anas Aremeyaw Anas’ permission to appear in camera as a prosecution witness in the criminal case Republic v. Kwesi Nyantakyi & Another was quashed by the Supreme Court, which was presided over by Justice Baffoe-Bonnie, in response to a petition for certiorari brought by Kwesi Nyantakyi.

They stated that because the “Number 12” documentary premiere took place in public with no security issues, why would a court hearing with complete security be held behind closed doors instead than in public?
“Tiger Eye PI and its CEO, Anas Aremeyaw Anas went public with the video documentary because it was in the public interest and should have his testimony in open court, too. The public has an interest in his testimony,” they said.

Following Justice Baffoe-decision, Bonnie’s sources said that Anas was no longer permitted to enter the courtroom wearing a face-bead mask since she was required to testify in open court like any other citizen present for any session.

His legal team, though, is adamant that the claims are untrue and should be ignored.

Read the statement issued by Anas lawyers below: 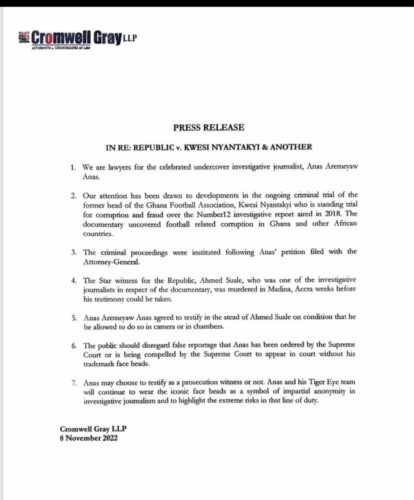