The official home and away uniforms for Asante Kotoko’s next 2022–23 campaign, which will start in September, have been made public.

The kits were created by Erreà, an Italian provider of sporting goods that signed a three-year contract with Kotoko in 2020.

The away uniform is green, just like it was the season before, while the home uniform is the customary red.

The club’s current season’s theme, which honors the Asantehene who serves as the organization’s patron, is “Celebrating the pillar of peace: His Royal Majesty Otumfuo Osei Tutu II.” 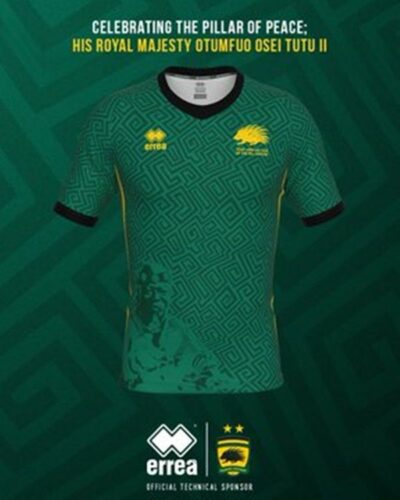 On both jerseys’ right bottom side is a picture of Otumfuo Osei Tutu II, the club’s owner and life patron. Before the 2022–23 season, Kotoko will travel to Turkey for preseason.

The Porcupine Warriors will spend two weeks in Europe getting ready to defend the championship they won the previous year.

Before returning to Ghana for the start of the league in September, Asante Kotoko will play a number of friendlies against some Turkish clubs.

The Ghanaian giants spent pre-season in Dubai the previous year.

However, rumors that their coach, Dr. Prosper Ogum, has resigned have left the future of the team in doubt.Frack Etouga Mbella, a forward from Cameroon, has returned to Ghana despite interest from numerous foreign teams.

In addition to winning the MTN FA Cup and performing well in the CAF Champions League, Kotoko won the Ghana Premier League last season and plans to defend its title the following year.

Previous “President Mills will not be forgotten” – Akufo-Addo
Next Government revises economic growth estimate to 3.7% from 5.8% as stated in 2022 budget

Spread the love A project to remove homeless, mentally ill, or insane people from the …