The Asogli State Council has defined as lies, sure claims made through Mr Paul Adom-Otchere, host of Metro TV’s Good Evening Ghana programme regarding the rejection of an amount GHS365,000 by Togbe Afede, the Agbogbomefia of the Asogli State for being a member of the Council of State when serving as the President of the National House of Chiefs.

Togbe Afede recently refuse to accept his ex-gratia as the member of the Council of State stating that it was a part time job and he was serving his country so therefore he can’t take that huge sum of money from the poor country.

“A Council of State [member] is paid each month and he [Togbe Afede] took all his salaries, of which he’s entitled to… In giving us the narrations [on why he refunded the ex gratia], he  should have told Ghanaians that he couldn’t attend all meetings and conferences of the Council of State, but he took all his salaries consisting of his vehicle loan, a waiver from Ghana Ports and Harbour’s Authority to import cars…the quantity of monies government [took] off the loans that have been paid to the Council of State individuals are greater than the GH¢365k he’s speaking about.” Mr Adom Otchere said it on his program yesterday.

According to him Togbe only attended 16% of the council of state meetings.

But in a sharp rebuttal by the Aogli in a statement clarified that the Journalist lied on Togbe’s attendance at conferences of the Council of State are each wrong and misleading.

“The numbers Paul Adom-Otchere presented on Togbe’s attendance at meetings of the Council of State are both incorrect and misleading and are a disingenuous attempt to discredit Togbe’s performance at the Council”.

“We challenge him to provide the Council’s attendance register from which he compiled his numbers for all to know the truth” the statement added. 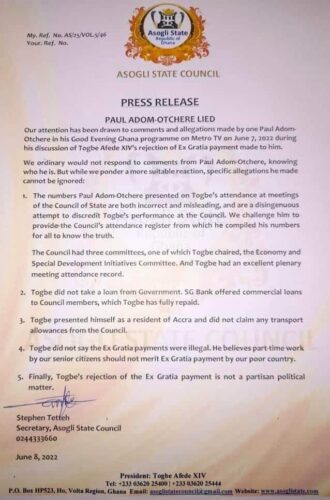