According to a letter from Dan Botwe, the minister of local government, decentralization, and rural development, Yaw Danso, the DCE of Bosome Freho in the Ashanti Region, has been suspended immediately.

“The president has directed the suspension of Yaw Danso, district chief executive for Bosome Freho District Assembly with immediate, pending investigations into his alleged engagement in illegal mining (galamsey) activities.”

“In view of the above, you are requested to provide oversight responsibility for the management and administrative issues concerning the district, until further notice,” the letter said.

President Akufo-Addo had already summoned Danso after a video went viral accusing him of illicit mining.

Yaw Danso is accused of engaging in shady business deals and transactions involving mining concessions under his control.

Read the suspension letter below: 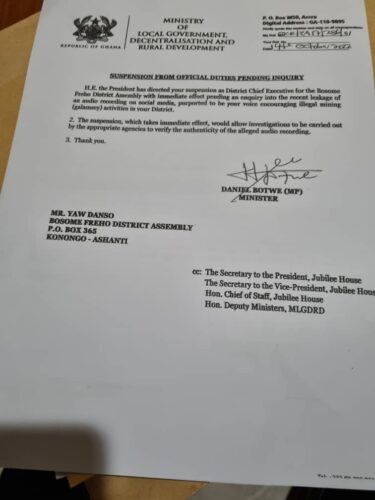