The Association announced that it was halting the action with immediate effect in a statement dated November 24, 2022 and signed by its National President, Frederick Forkuo Yeboah, following the conclusion and signing of Conditions of Service for its members with the government.

After what CENTSAG claimed was the government’s refusal to put into effect an agreement on 2022 conditions of service for its members, CENTSAG began a strike action.

Regarding the promotion and placement of its members on the Single Spine Salary Structure, the Association has accused the government of years of negligence and discriminatory treatment.

However, the association said in a statement ending the strike, “Following a successful conclusion and signing of our Conditions of Services and a review of the effective date for the placement of first-degree holders, we wish to bring to the notice of all members of the Colleges of Education Non-Teaching Staff Association of Ghana (CENTSAG) that the indefinite strike launched on Monday, November 14, 2022, has been terminated with immediate effect.” 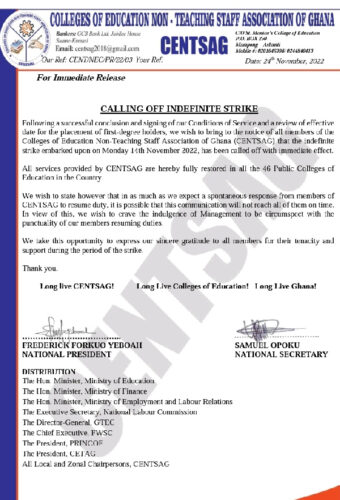