The Kumasi Metropolitan Assembly (KMA) has advised merchants in Kumasi, the capital of the Ashanti region, not to give money to unidentified individuals in exchange for the promise of being given shops at phase II of the Kejetia Redevelopment Project (Central Market) while the project is still being built.

The KMA stated in a statement that these anonymous individuals are not authorized and that anybody who pays money to anyone with the expectation of receiving allocation at the central market after it is finished is doing so at their own risk.

According to the statement, no decision has been made on the sum to be paid for the distribution of stores after the project is finished.

It said that all such information pertaining to the distribution and payment of stores, as well as the modes of payment, will be made public at the proper time. 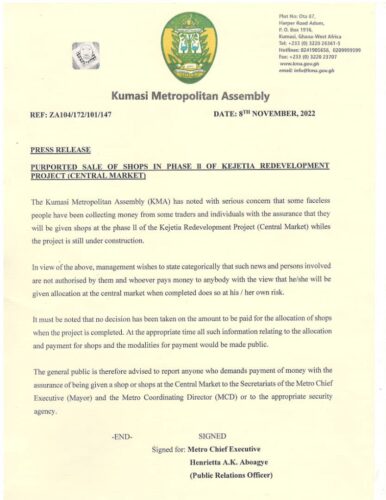