Vice President Dr Mahamadu Bawumia has declared his intention to start a fundraising campaign in support of the party’s goal of registering all members to aid in data collection and membership analysis.

Ministers, lawmakers, appointees, patrons, and other party supporters would be approached to help the fundraising effort, according to Dr. Bawumia.

The Vice President said this on Wednesday, November 9, during a working visit to the New Patriotic Party (NPP) headquarters in Accra.

During the National Delegates Conference, Dr. Bawumia also expressed his gratitude to the Party’s national executives for their friendly greeting and his congrats on their various election successes.

He affirmed his faith in the Executives and said they were equipped to run NPP’s operations.

He said that the Party-Government interactions will aid in bridging the gap. 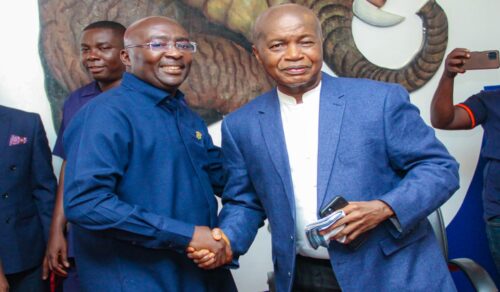 The Party leadership was also informed by Vice President Dr. Bawumia of his commitment to helping his boss, President Akufo-Addo, properly carry out his duties as President.

The implementation of the government’s digitalization agenda, the Sino-hydro deal, which resulted in the actualization of facelifts of roads and interchanges, paperless ports, improved mobile money interoperability, one constituency one ambulance, and other major policies were among those he detailed.

He reaffirmed the commitment of the administration to handle the nation’s current economic situation and gave the assurance that mitigating measures are being implemented to relieve residents of any hardship regardless of external shocks.

The Vice President was thanked for coming, encouraged to continue supporting Party operations, and assured of the Party’s unwavering support for the presidency and its continued success by the National Chairman.