Electoral Commission boss is being utilized against me – Odike

Akwasi Addae, also known as Odike, is the founder and leader of the United Progressive Party (UPP), and he asserts that the Electoral Commission (EC) is being utilized against him.

He claimed that President Akufo-Addo now uses the arbitrator for all political parties as a weapon to carry out his own preferences.

Reacting to the cancellation of his party’s certificate by the EC during an interview with Happy98.9FM’s ‘Epa Hoa Daben’ political talk show, he said, “Jean Mensa was brought in to destroy me by Akufo-Addo. As a party, all our documentations are intact. We have our head office around the Top Radio area and have offices in every region in the country. The UPP had its certificate cancelled because of me and not because we didn’t meet requirements.”

Odike believes he predicted this would happen when Wontumi informed him he wouldn’t be allowed to run in the general elections in 2020.

At the outset of the election, the politician successfully passed all inspections and was given the go-ahead to run.

He was even applauded by EC Chair Jean Mensa before learning in the press two weeks later that he had been disqualified.

He urged on Ghanaians to muster their bravery and support groups and people that speak out against the administration and its flaws in order to denounce the unfair treatment meted out to him and his party by the EC.

The EC conducted a statewide effort to check the offices of all Ghanaian political parties that had been registered between May and June 2022.

However, following the exercise, the EC acted in accordance with Section 15(3)(c) of the Political Parties Act of 2000, Act 574, which requires it to revoke the registration of Political Parties that lack offices at the national and regional levels.

Read the letter below 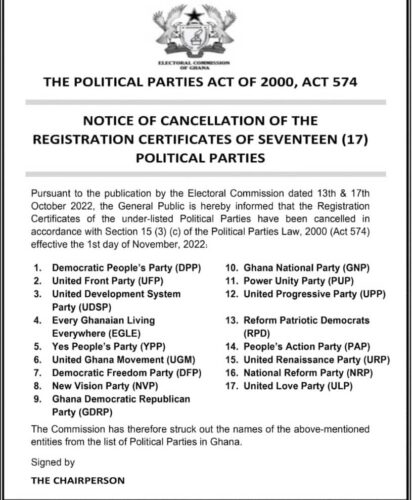 Previous There are now 98 NPP MPs opposed to Ofori-Atta, and they plan to boycott the budget presentation
Next PNC, CPP, and PPP to work together to unseat NPP 2024