Ellembelle DCE and 3 others arrested over missing excavator

In Ellembelle in the Western Region, one of the missing excavators that police were looking for has been located.

Kwasi Bonzoh, the District Chief Executive of Ellembelle, as well as three other people have been detained by police for allegedly obstructing traffic.

According to a statement from the police, the excavator was discovered on Tuesday after “days of intelligence activities.”

“A team of operations and intelligence personnel working day and night in the Ellembelle District recovered the missing excavator many kilometers into a forest.” 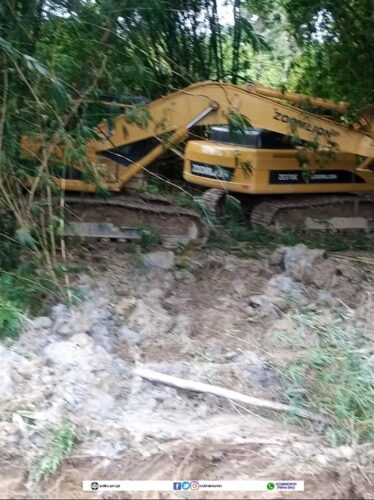 Kwasi Bonzoh “organized and led some thugs to attack the police and hinder the operation,” according to the police.

The other excavator is still missing, and authorities are working to find it and apprehend those who are responsible.

Last Monday, the Western Regional Police Command denied the assertion that Mr. Kwasi Bonzo, the District Chief Executive (DCE) of Ellembelle, or any other member of the assembly handed over two excavators to the police.

According to a report on Friday, two excavators that were in the hands of the police in Ellembelle had vanished.

However, the Police asked the public to dismiss the article and treat it with the contempt it merits in a statement.

“We wish to categorically state that no excavators were handed over to the police by the District Chief Executive of Ellembelle, Mr. Kwasi Bonzoh or any other person from the assembly. We, therefore, urge the public to disregard the publication and treat it with the contempt it deserves”, it added.

The statement went on to say that it is instead looking into the DCE and two other people.

“The DCE, his personal assistant, and another person are being looked into in relation to the allegedly missing excavators,” the statement reads.

POLICE RECOVER ONE OF THE MISSING ELLEMBELLE EXCAVATORS, DCE AND THREE OTHERS ARRESTED FOR OBSTRUCTION
The Police through days of intelligence operations yesterday 6th September, 2022 retrieved one of the excavators that was reported missing from Ellembelle.
A team of operations and intelligence officers working day and night discovered the missing excavator several kilometres into a forest within the Ellembelle District.
While the team of police officers were escorting the excavator to Takoradi, at the Axim Junction, the DCE of Ellembelle, Mr. Kwasi Bonzo organised and led some thugs to attack the police and obstruct the operation. The DCE and three others were therefore arrested accordingly.
Investigation continues to recover the other excavator and arrest all those behind it to face justice.
Source: Ghanatodayonline.com
Share