Extension of the deadline for Sim registration is praiseworthy-Okudzeto Ablakwa

Samuel Okudzeto Ablakwa, the National Democratic Congress (NDC) representative for North Tongu, applauded the government for extending the deadline for sim card registration throughout the nation.

Ghanaians must register their sim cards by September 30, 2022, or they will be prohibited.

Building a reliable and secure sim database in Ghana is the goal.

The opposition member responded to the announcement by saying that the issues with the Ghana Card, which is a key prerequisite for the sim registration process, must be resolved.

“I commend government for extending the deadline for the sim card re-registration exercise,” Ablakwa tweeted on Sunday. “It’s now time to immediately fix the avoidable bottlenecks with Ghana Card issuance and the needless ID rigidity.” 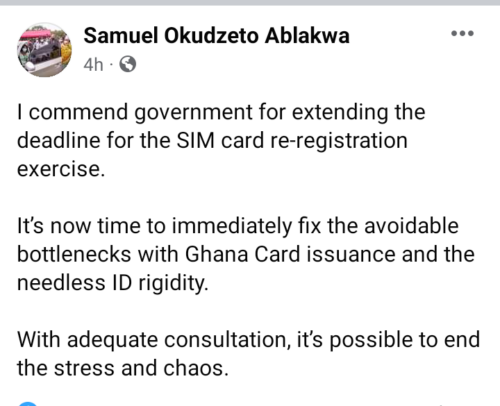 The government has extended the SIM card re-registration date to September 30, 2022.

“The program will be extended until September 30th in order to mark the anniversary of its beginning and give us a full year.

According to the Minister, voice and internet services will not be available to any sim that has not been registered by the end of August.

The deadline for everyone to reregister their SIM cards with their Ghana Cards was originally July 31.

Nonetheless, the Communications and Digitalization Minister, Ursula Owusu-Ekuful, stated at a press conference on Sunday that the extension came after discussions with industry stakeholders.

“Upon consultation with the industry and in view of the challenges enumerated above, I have very reluctantly decided to grant a conditional extension. The programme will be extended to 30th September to end on the anniversary of its commencement.”

Despite difficulties with the Ghana Card, such as long lines and other issues, the Minister highlighted that many Ghanaians still failed to register their SIMs after the deadline was extended.

So, this deadline extension is the last one.

The numbers show that when the initial deadline was extended on March 21st, there was a 90 percent decrease in SIM reregistration.

Before a week ago, there were no lines; instead, people began going to register as soon as they realized the deadline was approaching after going to bed.

“The mobile network operators, NCA, and the NIA have all employed additional people, obtained the necessary logistics, and are paying significant sums to complete this exercise successfully,” she continued.