According to predictions made by Mr. Seth Terkper, a former finance minister, the program the Akufo-Addo Addo administration is requesting through the International Monetary Fund (IMF) is likely to result in partial or complete debt forgiveness.

Mr. Terkper also mentioned that given the worsening financial crisis, the proposal is expected to address the government’s revenue and expenditure issues.

Speaking on the Ghana Tonight show on TV3 with Alfred Ocansey on Monday, September 26, Mr. Terkper, who led the team to engage the Fund during the Mahama administration, was asked what kind of program Ghanaians should anticipate from the ongoing IMF engagement. He responded, “I think this is the 17th programme, and I think it will be a mixture of a programme in the context of heavily indebted poor countries [HIPC], when you had a lot of debt reliefs, it could

“It could also be the recent one which the NDC started and the NPP concluded with serious homegrown elements like Sinking Fund, Stabilization Fund and others which we thought should become an element of our fiscal framework. Remember we are talking about debt.

“I keep reminding people that debt is the product of revenue minus expenditure, deficit and borrowing and when you don’t repay then the debt keeps increasing. So this programme will also tackle revenue, it will tackle expenditure”

Discussions with the IMF for a program that will be backed by the IMF have already begun between the Bank of Ghana and the Ministry of Finance.

Confirmation that Ghana’s debt is on a sustainable path is a crucial need for a program.

A thorough Debt Sustainability Analysis (DSA), which is under underway, will be necessary for this.

The Government of Ghana is putting up a thorough post-Covid-19 economic agenda, according to a statement released by the Finance Ministry on Monday, September 26. This program will serve as the foundation for the IMF negotiations. 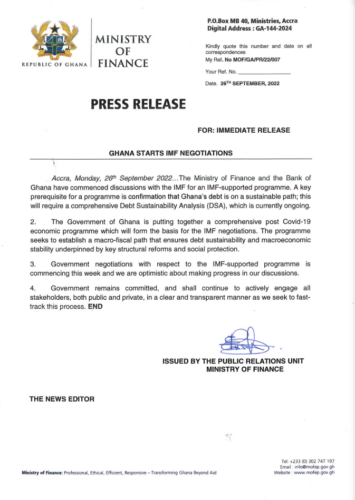