A study by the Ghana Statistical Service (GSS) found that both the public and commercial sectors received bribe payments totaling about Ghc5 billion.

Professor Samuel Kobina Annim, the government statistician, claims that there is a lot of corruption in the Ghana Police Service. 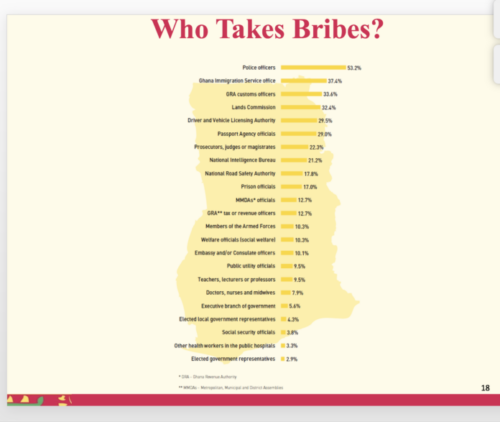 The Ghana Immigration Service and the Ghana Revenue Authority came in second and third, with 53.2 percent and 37.4 percent of corrupt cases, respectively, for the service.

The analysis also revealed that 26.7 percent of Ghanaians engage in bribery, suggesting that one in four people who interacted with public officials in the year before to the survey had either been requested to pay a bribe or were offered a bribe but declined to do so.

According to the poll, Ghana’s rural and urban areas have the same prevalence of bribery on average.

But there are significant differences among the 16 regions of the nation. 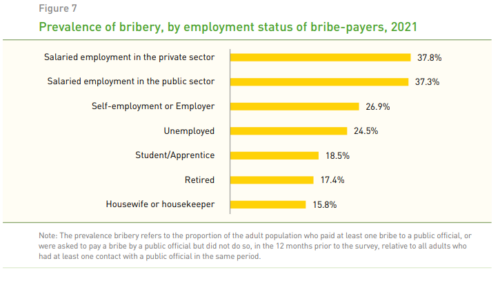 For instance, the regional prevalence of bribery was significantly lower than the national rate in the Bono East, Savannah, and Volta regions.

The percentages of corruption in the three regions were 11.8 percent, 14.5 percent, and 19.1 percent, respectively.

The percentage of corrupt instances recorded was significantly greater in the Western North, Ahafo, and North East regions, at 53.4, 47.0, and 41.9 percent, respectively. 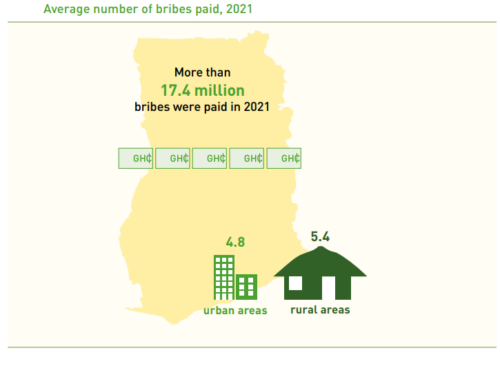 The study also revealed that there were age-related differences in Ghana’s prevalence of bribery.

“Compared to the older population, younger persons are more prone to pay bribes.

The report noted that “the prevalence of bribery decreased steadily to 17.6 percent among those aged 65 and over, while bribery among the youngest adult age group 18 to 24 has a prevalence of 23.9 percent,” adding that “Ghanaians aged 25 to 34 years were the age group most likely to pay bribes” in 2021.

The poll also revealed that individuals with various levels of educational attainment experienced bribery to varying degrees, and a variety of circumstances may account for the variations that affect the acts of bribery. 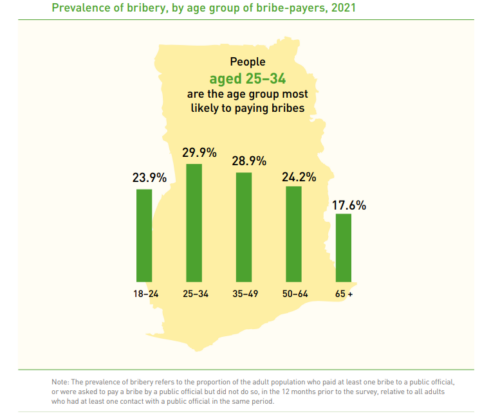 As the former may be thought to be more likely to have the means to pay bribes, corrupt public officials may also frequently target them more than weaker socioeconomic groups, according to the survey.

Indeed, the poll revealed that people with the highest level of education, such as a bachelor’s degree or higher, are the group most likely to engage with public officials and the most likely to encounter bribe requests.

This indicates that those with the greatest degree of tertiary education in Ghana are 1.7 times more likely to report having paid a bribe than those with no formal education when they come into contact with a public official.

Furthermore, because more private services are likely to be used in urban regions than in rural ones, the contact rate with private sector workers there is significantly greater (46.9% vs. 27.6%).

But in 2021, public sector bribery was more common than the private sector, with a prevalence of 26.7 percent compared to 9.1 percent.

In addition, people are more prone to bribe private sector workers in rural than in urban areas, in contrast to the public sector, where there is no discernible difference in the prevalence of bribery in urban and rural areas.

The prevalence of private sector bribery varies noticeably among Ghana’s regions, according to the report.